This is one of my favorite photographs of the Roberts clan, my maternal grandmother’s (Leona Roberts Redles) family. It’s one of many that I scanned this past March when I was visiting my family in Valdosta, Georgia. This was taken at the J. T. (John Taylor) Roberts house on Wells Street. We called it the Big House. This was taken on the side porch on the south elevation. I’m guessing it was taken around 1936 or so. My Aunt Catherine (Redles) looks to be about four or five years old and my mom looks about ten or so. Click on the photo to enlarge it. I resorted to numbering everyone since the folks on the steps aren’t sitting in straight rows.

Most of the folks in the photograph are descendants of John Taylor (J. T.) and Catherine (Young) Roberts, my great grandparents. Some are spouses of the descendants. I’ve included the nicknames that my mom wrote on the back, but I’ve added their “real” names. One of my dad’s friends once said that if you want to talk about someone in this family but don’t want anyone to know to whom you are referring, just use their real names, because no one (outside of the family) knew what their real names were! I had to look up some of them myself when I was labeling the photo! Get ready. It’s a long caption. (Nicknames and maiden names are in parentheses.) 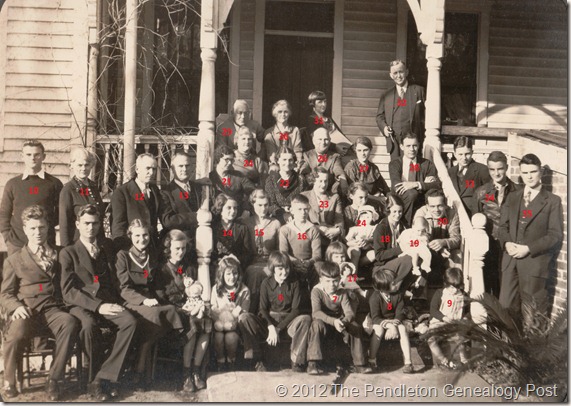 What a handsome family! A lot of them are very familiar to me as I knew them when I was a kid growing up in the 50s and 60s. Some of the youngsters in this photo now have grandchildren and great grandchildren. I wonder what a Roberts family photo would look like now!

Catherine
Posted by Catherine Pendleton at 3:46 AM