While I was visiting my family in Valdosta, Georgia, this past March, I rummaged through my maternal grandmother’s desk at my mom’s house. It’s something I’ve done since I was a kid. The desk is filled with old family photos of my mom’s side of the family, mostly the Roberts side and some on the Redles side. I spent several days scanning all of the photographs and some pages out of a couple of college yearbooks that belonged to my grandmother Leona Roberts. Tucked into one of the drawers of this old desk are a journal and a scrapbook that belonged to my maternal second great grandmother, Jane Eliza Myers. I don’t remember seeing these before, but then, whenever I poked around in the drawers over the years, I was only interested in looking at photographs.
Jane Eliza Myers was born in Philadelphia, Pennsylvania, on January 14, 1818. She was married to my maternal second great grandfather John Adam Redles (1817-1880). Their son George Albert Redles (1843-1912) is my great grandfather. When I showed the scrapbook and journal to my mom, she told me that John Redles went to California during the gold rush. I had no idea! Some of Jane’s writings in these two books are about her longing for his safe passage and return home.

Jane used an old business ledger that belonged to her husband John as her scrapbook. On several of the pages, she pasted articles out of newspapers, but on some she wrote a few passages. In her journal, Jane wrote some poetry. The photograph at the beginning of this post is her signature, “Jane E. Redles,” written inside of one of the books.

When John left for the California gold rush in 1849, Jane was 31 years old with four small children at home—including my great grandfather George—all under the age of ten. Below are some of her writings from the journal and scrapbook. I’ve added punctuation to the transcriptions for readability. Also, she was in the habit of leaving off the apostrophe “s” on “husband.” 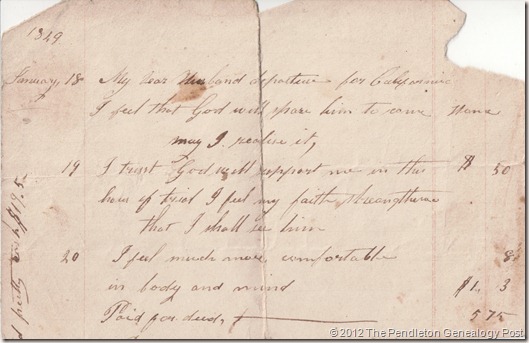 Above are some entries that she made soon after his departure. The top of the page says 1849. The first entry is January 18: “My dear Husband [sic] departure for California. I feel that God will spare him to come home. May I realize it.” On January 19, she writes: “I trust God will support me in this hour of trial. I feel my faith streangthen [sic] that I shall see him.” On January 20, she was feeling better: “I feel much more comfortable in body and mind. Paid for deed-----.” The rest of this page is missing.

The above entry is dated Sunday evening, February 18, 1849. It says, “Just one month since my Husband [sic] departure for California. I trust God will spare him to return Home to his little family.”

At the top of the page below is a poem that Jane wrote during John’s absence: 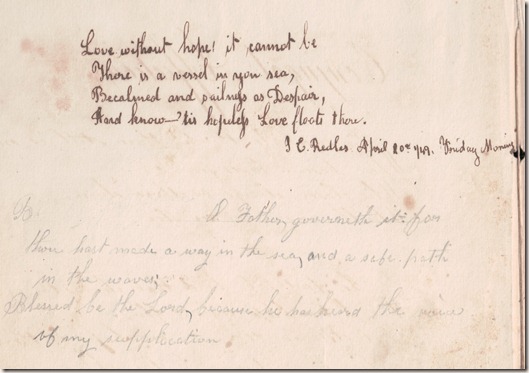 Below is my attempt at a transcription of the poem, but I had some trouble reading her handwriting:

Love without hope! it cannot be
There is a vessel in your sea,
Becalmed and sailness[?] as Despair,
and know—‘tis hopeless Love floats there.

The passage below the poem in the above photo reads: “Father, governeth it for thee[?] hast made a way in the sea, and a safe path in the waves; Blessed be the Lord, because he has heard of my supplication.”
I don’t know how long John was in California. I don’t know how he traveled to California. Based on Jane’s writings above, I wonder if he went by sea. I looked for a passenger record on ancestry.com but couldn’t find one. According to an article on history.com, thousands of people, mostly men, flocked to California during the 1849 gold rush, arriving by land and by sea. They either sailed to Panama or around Cape Horn. The gold rush peaked by 1852. 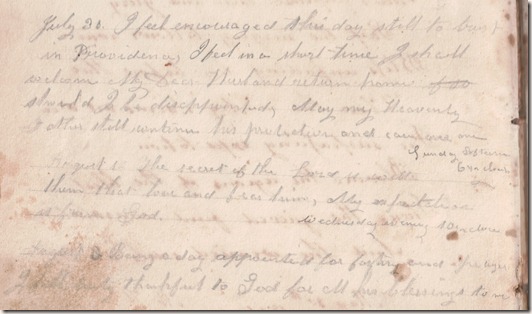 The passage above is dated July 30 and mentions John coming home, but there is no year recorded. I suspect he returned the same year, in 1849. [Update: one of my Redles cousins noted that the length of the voyage—three to four months—would not have made it possible to return so soon, and that it’s more likely that John didn’t return until around 1851.] Here is a transcription of first entry: “I feel encouraged this day still to trust in Providence, I feel in a short time I shall welcome My dear Husband [sic] return home. Should I be disappointed, May my Heavenly father still continue his protection and comfort me.”

I called Jane a gold rush “widow” in the title of this post, meaning something like a “football widow.” There are a few things I’d like to know. How did Jane manage while John was gone? She seems upset and worried at first. Did she feel this way the whole time he was gone? Did she have help with the children and household during this time? Was family nearby? Did she move in with family while he was gone? I don’t know anything about her family or even who her parents were.

John made it home from California safe and sound. They had a few more children after he came back. John and Jane both died in Philadelphia—John on October 5, 1880, and Jane on November 14, 1885 [1]. They are both buried at the Gloria Dei (Old Swedes) Church in Philadelphia [2].