Standing in Sunset Hill Cemetery in Valdosta, Georgia, is a memorial dedicated to the slaves of Valdosta who are buried there in unmarked graves. Begun in 1995, the memorial was made possible by a group of Valdostans, led by Rev. Willie Wade, who raised money for the memorial [1]. The slave cemetery was “rediscovered” in 1956 when frequent cemetery visitor Belle Hunt Finley told cemetery employee Melvin Nelson that slaves were buried at the location where he was about to build the cemetery’s compost pile, and she requested that the area be marked off and preserved[2]. 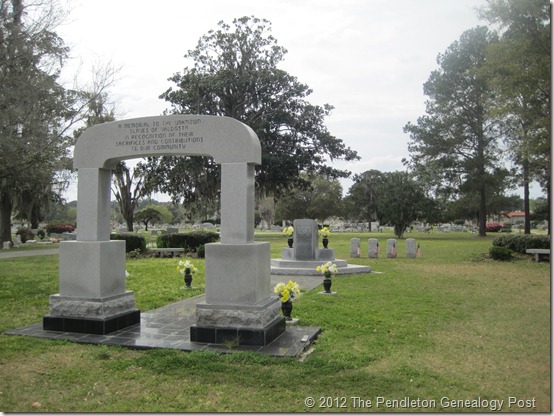 The granite arch in the above photograph reads, “A memorial to the unknown slaves of Valdosta in recognition of their sacrifices and contributions to our community.” 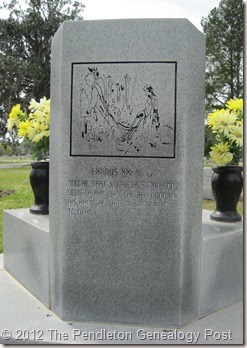 The granite marker (see above) behind the arch quotes Exodus 21:16, “And he that stealeth a man and selleth him of if he be found in his hand, he shall sorely be put to death.”

After the Civil War, Valdosta was occupied by Union soldiers, including the 103rd Colored Infantry who was stationed in Valdosta in 1865 [3, 4]. They were garrisoned on the corner of West Hill Avenue and South Patterson Street.[5] Some of the soldiers came back to Valdosta to live and are buried in Sunset Hill Cemetery [6]. Behind the memorial are markers dedicated to four of these African American soldiers who are also buried in the cemetery in unmarked graves. According to a February 24, 1995, Valdosta Daily Times article, there are six African American soldiers buried here, and plans were to have a total of six markers as soon as funding was available [7]. 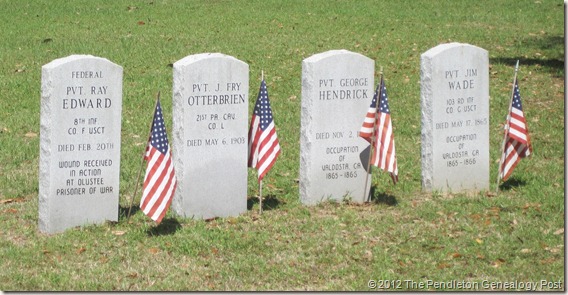 The markers read (left to right):
In 2011, the Department of Physics, Astronomy, and Geosciences at Valdosta State University used Ground Penetrating Radar (GPR) to look for possible graves immediately west of the Unknown Slaves Memorial (click here for details of the study). Several large, rectangular features were found that are likely some of the graves.

To visit the Unknown Slaves Memorial at Sunset Hill Cemetery, enter the main cemetery entrance off of Oak Street (see lower right on the map below) and follow the right fork until you reach the road labeled West Street on the map. The memorial is just beyond this intersection (labeled Slave Cemetery just below Section P on the map below).