Who Was The Roberts Family Nurse? 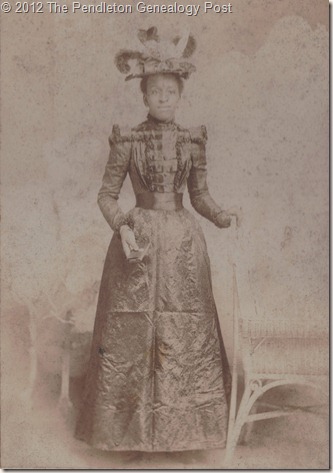 This is another one of the photographs that I scanned at my mom’s house from the desk that belonged to my maternal grandmother Leona (Roberts) Redles. Even though this was taken before my mom’s time, I asked her if she happened to know the nurse’s name, but she didn’t.

The back of the photo simply says “Nurse” (see image below) in what looks like my grandmother’s handwriting. The photograph was taken by photographer D. S. Wilson of Valdosta, Georgia.

I don’t know much about clothing styles through the centuries, so any help dating this photograph based on her dress style is welcome. Her dress looks like it might be made of silk, and she has a silk ribbon around her waist. There is an intricate pattern printed on the fabric. The dress has a high collar and tight, straight sleeves with a puff at each shoulder. The bodice appears to have pleats down the front, and it looks like it’s trimmed with the same ruffle as the collar and sleeves. The dress does not touch the floor. Joan L. Severa, in Dressed for the Photographer: Ordinary Americans and Fashion, 1840-1900 (The Kent State Press, Kent, Ohio, 1995), dates this dress style to the 1890s. Is that a crease down the front or seam? If you look to the right of that (toward her left), there appears to be another seam. It looks like there’s a crease going across the dress, maybe where it was folded. She’s holding what looks like a small billfold or booklet that is closed with a clasp, and she’s possibly wearing a bracelet around her right wrist. What a tiny, corseted waist she has! She’s standing next to a wicker chair, and it looks like another wicker chair is behind her.

If I only had Roberts family history to go on, I would guesstimate that this photograph was taken in the late 19th century or the very early 1900s. John Taylor Roberts married Catherine Margaret Young in 1883. (They lived in the Big House.) Their first child (William Leland Roberts) was born in 1884. Their last child (Mary Remer “Dinah” Roberts) was born in 1900. There were nine children in all. They would have needed a nurse for quite some time. I remember my mom saying that, with her own five children, she had at least one baby in diapers and on a bottle for 10 years straight. This nurse could be one of several that the Roberts family had over the years.

I checked the 1900 and 1910 census records (1890 is not available) to see if there was a live-in nurse in the Roberts household, but only the Roberts family members are listed. I searched the 1900 census on ancestry.com using “nurse” as a keyword just to see what would come up. There were a lot of nurses in Valdosta, Georgia, in 1900.

I was also curious about the nurse herself. She was probably of modest means, yet she is elegantly and stylishly dressed. Plus, she paid to have a full-length photograph taken. Was the photograph for a special occasion or was the dress a special dress? Ms. Severa notes, after describing a circa 1890-1891 photograph of a woman similarly stylishly dressed who worked as a domestic, that people of the working and lower-middle classes did make the effort to dress well, even though they did not have much money [1].

What else does the photograph say about her?