Among the many, old family photographs in my grandmother’s (Martha Leona Roberts) desk at my mom’s house, I found a few of my parents’ wedding. When I was a kid, I loved looking at these photos and thought how beautiful my mom looked in her wedding dress and how handsome my dad looked in his suit! My parents, Albert Sidney Pendleton, Jr. and Leona Roberts Redles, were married on October 15, 1953, at the house where my mom grew up and where my dad proposed, the J. T. Roberts house—otherwise known as the Big House—in Valdosta, Georgia. Here are a few of those photos. 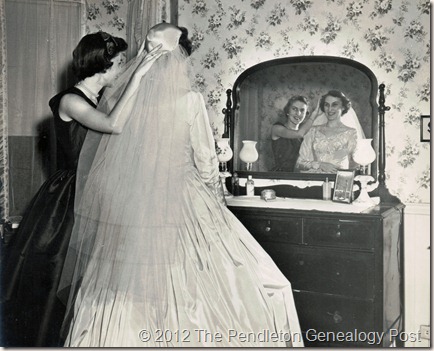 In the above photograph are my mom and her sister Catherine getting ready for the ceremony. They’re in the upstairs bedroom that they shared with their mother. [Update: they are actually in their Aunt Margaret Roberts Graham’s room.] (As I noted in a previous post, several of the children of John Taylor Roberts and Catherine Margaret Young lived in the Big House with their families.) 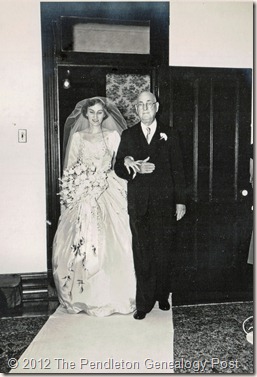 Uncle Big Bubba (William Leland Roberts), my grandmother Leona’s oldest brother, walked my mom down the aisle. (My mom’s father, William Liming Redles, died nearly 20 years earlier in 1932 in Washington, D.C. My grandmother packed up her two young daughters and moved back to Valdosta.) The ceremony took place in the parlor. 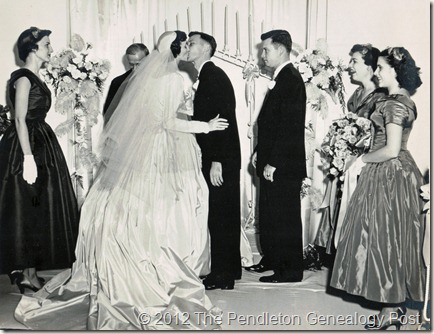 My parents smooching. From left to right: Catherine Redles (my mom’s sister and maid of honor), my mom and dad (of course), my dad’s brother (his best man) William Frederick Pendleton, and bridesmaids Laurie White (my mom’s friend) and our cousin Mary Remer Parramore (daughter of Redden and Mary Remer “Dinah” Roberts Parramore). 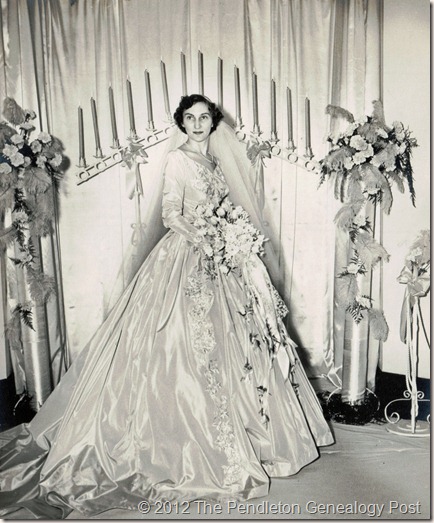 How ‘bout this dress! Beautiful! My mom's wedding dress was a Dior ordered from New York, and then it was trimmed in embroidery cut from a roll of silk that her father brought back to the U. S. from his sojourn in Japan several decades before. Update: My mom’s sister Catherine’s dress (the bridesmaid) was made from a bolt of silk that their father brought back from Japan.

Wedding photos to be continued….

Posted by Catherine Pendleton at 11:04 PM