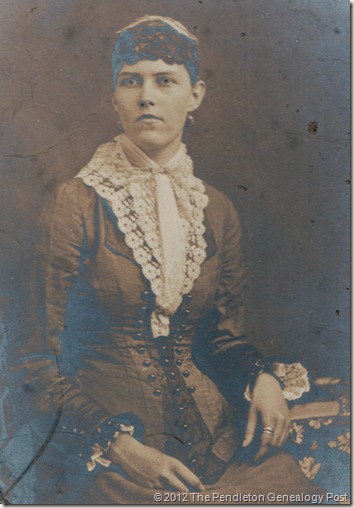 Below is what my grandmother wrote on the back (click the photos to enlarge them):

Transcription of the above: Leona Roberts Strickland – (Mrs. C. C. [C. S.] Strickland) Aunt Lonie – The aunt I was named for. My fathers sister (“Lonie” – pronounced with a long “o”— is also my grandmother’s and my mother’s nickname.)

Mattie Roberts was born during the Civil War on January 17, 1864, in Berrien County, Georgia [1, 2]. Her parents were William and Margaret (DeVane) Roberts. She married Colquitt Strickland (1857-1924) in Berrien County on January 31, 1883 [3]. Below is a copy of their marriage license on page 299 of the Berrien County marriage book available on Georgia’s Virtual Vault. 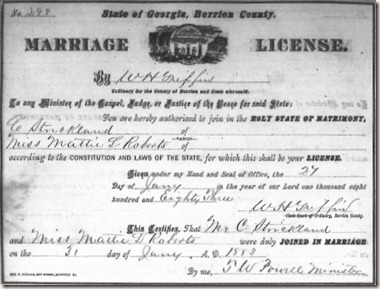 Mattie and Colquitt had three children: Charles, William, and Luelle [4]. Around the time that the 1900 census was taken, Mattie died on August 10, 1900, at the age of 36 [5]. At the time of Mattie’s death, her children were 16, 12, and 6 years old [6]. I noticed on the 1900 census that Mattie’s sister Beulah (Margaret) Roberts was living with them (See census record below starting at line 27. Click to enlarge). I figured she must have been there to take care of her sister Mattie and help with the household and the children. I also figured that Colquitt married again after Mattie died. I was right. He married Beulah [7]. 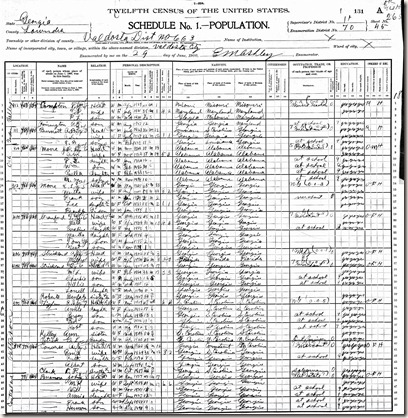 While I was scrolling though the Strickland burials on the Sunset Hill Cemetery interactive map, I noticed “INF. DTR STRICKLAND.” According to the description, the marker says “Infant Daughter of C. and M. L. Strickland.” There is also a link to the photograph of the marker. There are no birth and death dates. This indicates that Mattie and Colquitt had at least four children instead of three. On the 1900 census, Mattie is recorded has having had three children and all three were living (See census record above). Did this child die when Mattie died? I don’t have a copy of their death records.