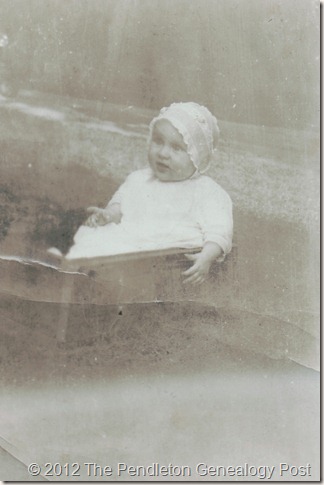 This is another photograph that I scanned from my grandmother Leona’s desk at my mom’s house this past March while I was visiting. At first I wasn’t sure who the baby was in this photograph. It sure looks like my mother, but written on the back is “Billie Redles” in what looks like my grandmother Leona’s handwriting. Who was Billie Redles? My grandfather William Redles didn’t have any sons, and he had no nephews with the last name Redles. Was the baby a cousin? When I showed it to my mom, she said, “That’s me!” Of course. “Billie” after her father William. What a cute nickname and one I’d never heard her called before. I wonder why they didn’t stick with it. Her nickname ended up being Lonie (pronounced with a long “o”) which is the same nickname as her mother’s. I think nearly everyone at the Big House had a nickname (or rather, nearly everyone in the Roberts family, as not all of them lived in the Big House). Here are a few: Doodle, Big Bubber, Little Bubber, Punkum, Brother, Bo, Koota, Midge, Snookie, Dinah, Bootsie, and Auntie. (In fact, I didn’t even know their real names when I was growing up.)

Here’s what’s written on the back of the above photo: 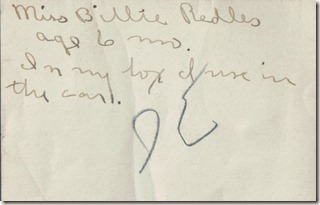 I’m glad babies don’t ride around in boxes in cars anymore (at least, I hope they don’t).