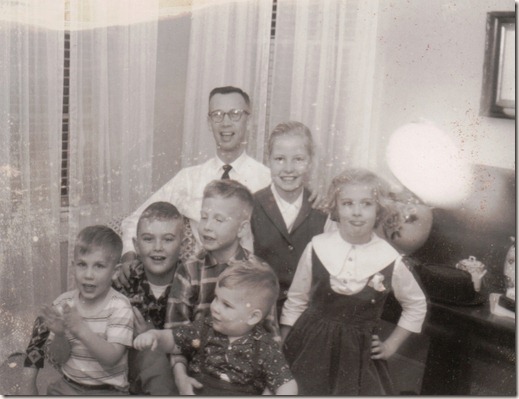 I couldn’t stop laughing when I found this photograph in my dad’s office. What a sight! That’s my dad (Albert S. Pendleton, Jr.) in the back. He looks like he’s having a great time! We’re all at my paternal grandparents’ house, Albert S. and Helen (Brown, Thomas) Pendleton on Slater Street in Valdosta, Georgia. From left to right: my brother Andy (Albert III), cousin Charles Joyner (my dad’s hand on his shoulder), cousin Billy (William Frederick) Pendleton, my baby brother John in Billy’s lap, next is cousin Leigh Pendleton (now Smith), and that’s me on the right with my hand on my hip. What’s up with that face I’m making! This must have been taken before 1960 because my sister Melissa (Missy) isn’t in it (or maybe they didn’t dare let one of us hold her). She was born in 1960 (my other sister Helen wasn’t born until 1963), and my brother John looks to be maybe going on two (he was a big baby, so it’s hard to tell). He was born in 1958.

Things were definitely lively when all of us first cousins got together!

Posted by Catherine Pendleton at 12:02 AM