Fall from a Buggy: The Death of Sarah Everett Young

While I was researching Sarah’s mother, Jane Carter, I looked up the Thomasville, Georgia, newspaper on South Georgia Historic Newspapers which has digitized copies of the Thomasville Times Enterprise from 1873 to 1922. While the articles don’t go back far enough to research Jane, I decided to see if there was an obituary for Sarah. I found an article about a buggy accident that later resulted in her death [1]. 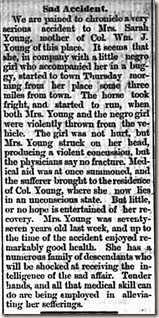 Sarah was headed into town on a Thursday from her home three miles away when the “horse took fright, and started to run.” Sarah and the young girl who was with her were thrown from the buggy. The young girl wasn’t hurt, but Sarah hit her head which knocked her unconscious. She was taken to the home of her son (“Col. Young”—probably William Joshua Young who was a Colonel in the Confederate Army) where she had been living and was given medical treatment, but there was no hope of recovery [2]. She died two days later on Saturday, April 15, 1876, never regaining consciousness [3]. She was in her late 70s. Funeral services were held at her son’s house, officiated by Rev. Mr. Quaterman of the Presbyterian Church, and she was buried in the “new cemetery” in Thomasville [4]. The April 22, 1876, issue of the Thomasville Times Enterprise notes, “Her spirit gently took its flight from the bruised body which had been its tenement for near three score years and ten” [5]. The matriarch of the Young family of Thomas County, Georgia, was gone. Rest in Peace, Sarah.