As I’m sure I’ve mentioned before, I’ve been going through the paper piles in my dad’s office trying to get everything organized and filed. It’s been a monumental task, and over the past several years since he passed away in 2006, I was only able to do this once a year when I visited my mom.  I moved back to Valdosta a couple of months ago, and I’ve barely touched his office except to add more paper to it that my sister Helen and I have found in the studio that was originally his office before he moved into the other room. We’ve found lots of interesting things.


We came across what appears to be the original 1866 labor contract between our paternal second great grandfather Philip Coleman Pendleton and Lydia Mitchel, signed shortly after the end of the Civil War (click on the image for a larger view). 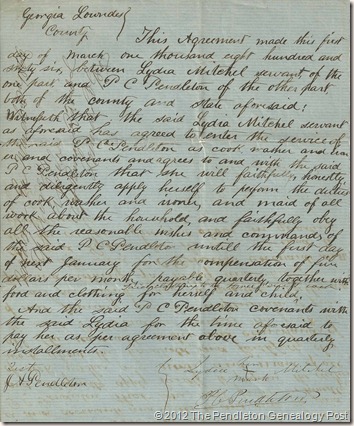 Georgia Lowndes County
This agreement made this first day of March one thousand eight hundred and sixty six, between Lydia Mitchel servant, of the one part, and P C Pendleton of the other part, both of the county and state aforesaid: Witnesseth that the said Lydia Mitchel servant of the said P C Pendleton as cook, washer and ironer and covenants and agrees to and with the said P C Pendleton that she will faithfully, honestly, and diligently apply herself to perform the duties of cook, washer and ironer, and maid of all work about the household, and faithfully obey all the reasonable wishes and commands of the said P C Pendleton untill [sic] the first day of next January for the compensation of five dollars per month, payable quarterly, together with food and clothing for herself and child. [Inserted just above this last bit is “paid clothing to her three outfits(?) each.”] And the said P C Pendleton covenants with the said Lydia for the time aforesaid to pay her as per agreement above in quarterly installments.
Test[?] J A Pendleton
Lydia (her mark X) Mitchel
P C Pendleton

There’s a ghost image of some lettering on the bottom of the paper as if it was folded before the ink was dry. Written perpendicular along the left-hand side is “Valdosta Ga March [illegible] 1866 [illegible] Lowndes County Ga.” I assume that J. A. Pendleton is Philip’s son James Aubrey.

In my previous post, Slaves of Philip Coleman Pendleton, I noted that at the time of the 1860 Ware County Georgia Slave Schedule, Philip had three slaves: two adult females and one male child, and according to his son William’s memoirs, one of Philip’s slaves was named Violet and one was named Lizzie.[1] (The Pendletons moved to Valdosta, Georgia, during the Civil War.) Philip’s granddaughter Constance noted in Confederate Memoirs that Philip’s slaves “were mostly house servants” who stayed with the family after the war ended.[2] Was Lydia Mitchel a former slave of the Pendletons?

Labor Contracts and Wages During Reconstruction

According to the Freedmen’s Bureau Online, during Reconstruction, the agency supervised labor contracts between former slaves and their employers as to wages, clothing provisions, medical care, and share of crops (precursor to sharecropping). There are several examples of these labor contracts on their website. Some are for indentures. When my cousin Alan read the above contract, he converted what Lydia was paid into today’s money:

Was this just another form of slavery? How was one expected to survive on so little? How does this compare to what a white servant was paid? Did this include a place to live? If not, how did Lydia pay for housing? In the 1870 U.S. census for Valdosta, there are no servants listed in the Pendleton household. I wasn’t able to find Lydia listed elsewhere in that census.

The Freedmen’s Bureau set a wage scale for Georgia in 1866 of $12 to $13 a month for male workers and $8 to $10 for female workers, plus employers were to provide them with food and a place to live.[4] These wages are higher (although, still a very low wage) than what Lydia was to receive. Workers on the coast and “in the fertile fields of southwest Georgia” had “slightly higher” wages than those of middle Georgia.[5] Did all employers adhere to the agency’s directives? I have a lot of questions and more research to do.