William Henry Cone, my maternal 5th great grandfather, was one ancestor that I knew very little about. In fact, I didn’t know anything. That is, until recently when one of my newly-found cousins (via 23andme DNA testing) and I were searching our family trees trying to figure out how we were related. We found that our common ancestors were William Henry Cone and Keziah Barber. When my “new” cousin shared some information that he had about them, he got my curiosity going.
William Henry Cone was born in the mid to late 1740s. The findagrave.com memorial records his birth as October 27, 1749, in Martin County, North Carolina. Several of the Daughters of the American Revolution applications that I found on ancestry.com have his birth year as 1745 with the place name of Pee Dee River, North Carolina.  The Pee Dee River doesn’t flow through Martin County, so is this a place name in the applications? Folks Huxford says William was born in 1745 “in the Pee Dee section.”[1] There’s a Pee Dee, North Carolina, in Montgomery County. Could this be it? The Pee Dee River flows right by this county (see map below). 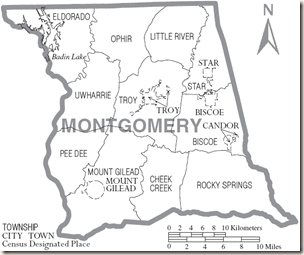 The map on the left shows the location of Pee Dee in Montgomery County in central North Carolina. The Pee Dee River forms the western boundary of this county. (This map is licensed under the Wikipedia Creative Commons Attribution-Share Alike 3.0 Unported license. Attribution: I, Ruhrfisch).


William’s father was also named William, and he, too, was a Revolutionary War soldier.[2]  [Note: Will Cone brought to my attention the Cone DNA Study by his father William G. Cone, Jr., Major retired GaARNG. William Henry Cone’s father could have been named William or Aaron. This DNA study has shown that the “Martin County” William Cone is not the same person as our “Pee Dee” William Henry Cone. Note: 8/3/17, the link to the Cone DNA study no longer works]  The son William married Keziah Barber in 1765 in North Carolina [3]. She was the daughter of William Barber, another Revolutionary War soldier. William and Keziah, along with Keziah’s sister Cassandra and brother-in-law Matthew Carter, moved to the Cheraw District in South Carolina in 1779. They then moved to the portion of Effingham County, Georgia, that was later used to form Bulloch County. In 1811, Cassandra Barber and her husband Matthew Carter moved to Jackson County, Mississippi, but William and Keziah Barber Cone remained in Georgia.[4] 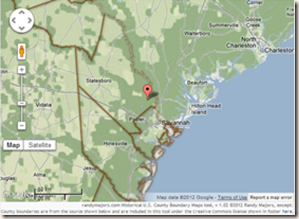 The red balloon in the map to the left is within the 1780 boundaries of Effingham County, Georgia. The eastern border is the Savannah River. Map from Randy Majors’ Historical U.S. County Boundary Maps http://randymajors.com/p/maps.html
According to a document on the Florida Society - Sons of the American Revolution, William was a Captain with the Richmond County Militia of Georgia during the Revolution. He and his men chased the Tories out of Georgia and back into Florida in 1781 [5]. Then William and his men were captured and held at Castillo de San Marcos in St. Augustine, Florida, but they escaped in 1783. For their service, they were given 200 acres of land on the Ogeechee River (it flows between the current borders of Effingham and Bulloch counties)[6]. The land William Cone was given for his service in the Revolutionary War was by “a special grant of Confiscated lands in Effingham County,” Georgia, recorded in Effingham County Deed Book A, page 1.[7]

William also had land on the Satilla River in what is now Camden County, Georgia, but at the time it was part of Glynn County.[8] He was a Representative from Effingham County in 1785 and 1787. He moved to his property on the Satilla River in the 1790s and lived there for a short time before moving back to his plantation, called Ivanhoe, in Effingham County. His Effingham County property became part of Bulloch County when the latter was created in 1796. He served as the foreman of the first Grand Jury, May Term, 1797, Superior Court.[9] 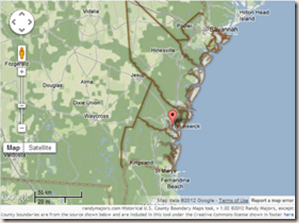 The red balloon on the map on the left sits in the 1780 boundaries of Glynn County. Camden County is to the south. Map from Randy Majors’ Historical U.S. County Boundary Maps http://randymajors.com/p/maps.html


William sold his Bulloch County property in 1801 and returned to Glynn County.[10] He was a Representative from Glynn County in 1804, after which he moved to Camden County where he served as Justice of the Peace in 1806. He resigned in 1808 and was succeeded by his son William.[11] Keziah died while they were living in Camden County.[12] William moved back to Bulloch County between 1812 and 1816. He deeded his property to his son Aaron in 1816 and died that same year.[13] Folks Huxford discovered in the Camden County records that William had a second wife, Martha. He apparently filed for divorce in 1812, and the case was dismissed when William died in 1816.[14]

William and Keziah Barber Cone had nine children. Their daughter Sarah was my maternal fourth great grandmother. (Sarah married William Anderson Knight. Their daughter Sarah Knight married William P. Roberts and are my maternal 3rd great grandparents.) William Cone’s memorial on findagrave.com notes that he was known as the “Fighting Parson,” and he has a bridge named after him that goes across the Ogeechee River that runs between Bulloch and Effingham counties. 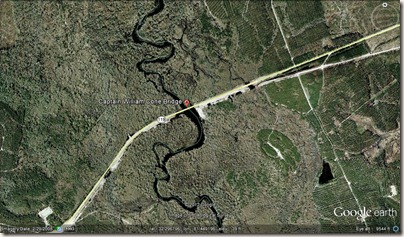 This Google Earth aerial shows the location of the Captain William Cone Bridge (indicated by the red balloon) on the Ogeechee River between Bulloch and Effingham counties in Georgia. (Click the aerial for a larger view.) 
William and Keziah Barber Cone are buried in the Old William Henry Cone Cemetery in Ivanhoe, Bulloch County, Georgia. My daughter graduated from college in Statesboro just to the northwest! If only I had realized how close I was to this cemetery when I helped her move there. I could have made a side trip to visit them. I’ve been to the Castillo de San Marcos in St. Augustine, Florida, more than once, but I had no idea this is where one of my ancestors was held prisoner! I’ll have to go visit it again with this in mind. I’m glad I got to learn more about this ancestor!