When I was researching census records for my 2nd great grandfather Philip Coleman Pendleton on ancestry.com a while ago, I came across an 1860 Ware County Georgia Slave Schedule with his name on it [1].  After his name, it says "as employee for."  I’m not sure what that means.  At first I thought it meant that Philip was an employee of the woman whose name is listed a few rows below his, but it didn't really make sense to list him as the owner if he wasn't.  Plus, since he had his own farm in Ware County, I didn’t think he’d be working on someone else’s farm, too.  Does this mean the people listed as his slaves were owned by someone else but worked for Philip?  It seems I read somewhere that sometimes slaves were hired out by their owners, but if these people in the 1860 slave schedule were owned by someone else, wouldn't they be included with that owner? 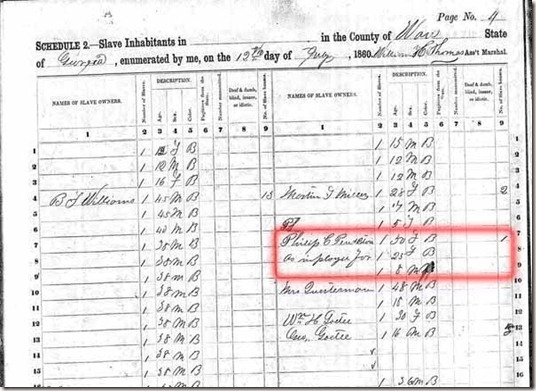 The other day, I was reading through Confederate Memoirs looking for information for one of my blog posts.  On page 18, my second great uncle William Frederick Pendleton (Philip's son) says that when he was a baby (he was born in 1845), the Pendletons moved from Savannah to a farm in Effingham County Georgia that was owned by his maternal grandfather Frederick Edmund Tebeau (my third great grandfather); they lived there until 1851 when they moved to Hancock County Georgia [2].  (Hancock County was where Philip’s younger brother Edmund Pendleton had a plantation.)

While on the Tebeau farm in Effingham County, Philip was employed as a teacher for the neighborhood children.  William mentions that they had one slave named Violet who had been given to his mother (Catherine Sarah Melissa Tebeau) by her uncle Alexander Shaw.  William says that Violet stayed with the Pendleton family "the rest of her life, even after she was emancipated" [3].  He doesn’t say when Violet was given to his mother, and he doesn't give any clues about her. I didn't find a slave schedule for Philip in 1850, so that makes me wonder if Violet was given to Catherine after 1850, maybe when they moved in 1851. If she is the 25-year-old female in the 1860 slave schedule, then she was probably very young in 1851, about 15 or 16.* I looked up the 1850 Chatham County Georgia slave schedule for Alexander Shaw [4]. There are two 16-year-old females on the 1850 schedule who would be about the right age to be one of the females listed in the 1860 schedule.

*Update:  I got a little ahead of myself here.  Please see paragraph below about “old Aunt Lizzie.” This is why I thought Violet might be the 25-year-old in the 1860 schedule. 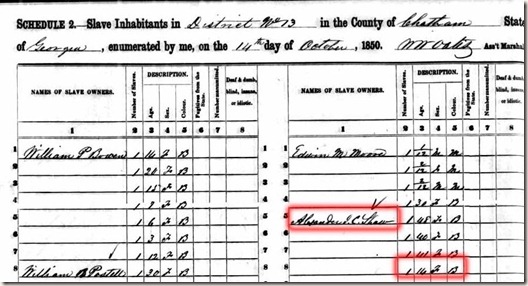 On page 52, William describes coming home to Lowndes County Georgia on furlough in 1864 during the Civil War and was greeted in the yard by "old 'Aunt' Lizzie."  In Echo of Drums, Uncle Louis notes that it was a Southern custom for children to address older servants with the "handle" of Aunt or Uncle [5].  So, we have names of at least two people who were their slaves, Violet and Lizzie.  I haven't come across a name for the young boy that is listed in the 1860 slave schedule.  Since William referred to Lizzie as "old," I wonder if she's the 50 year old female in the 1860 slave schedule.  She would have been about 54 in 1864 when William was on furlough!  I guess that would be considered old to a young man; he was about 19.
Constance Pendleton, the editor of Confederate Memoirs and the daughter of William, notes on page 84 that Philip didn't have many slaves, and the ones that he did have were "mostly house servants" that remained with the family after the war [6]. There are no servants or any other workers listed with the Pendletons in the 1870 or 1880 Lowndes County census, and there aren't any people living nearby in a separate household in either census named Lizzy or Violet.

Philip died in 1869 after being thrown from a buggy.  The family struggled financially afterwards.  The four older boys had to run the farm and the newspaper business to support their mother and five younger siblings [7].  Maybe they had to let their servants go for financial reasons, but William says that Violet stayed with them the rest of her life.  It's possible that their servants lived somewhere else in the county but continued to work for them.  Maybe Violet died before the 1870 census.   The only Violet that I found in the index for the 1870 Lowndes County census on ancestry.com who was black is Violet Hodge [8].  She is 40 years old which would make her year of birth about 1830.  She is living on a farm, and her occupation is listed as "keeping house," meaning housewife and not a domestic.  Below is a copy of part of the census page that shows Violet Hodge and other members of the Hodge household. 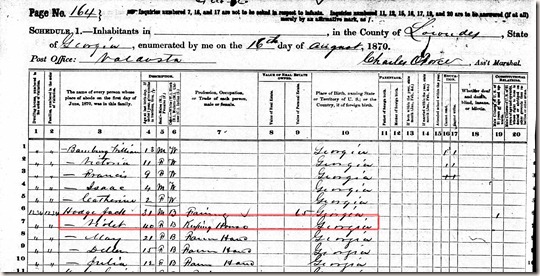 I found only one Violet in the 1880 Lowndes County census.  Below is the page for Violet Crumady and two daughters.  Her age is 50 which would make her birth year about 1830.  Her occupation is listed as a laborer [9]. 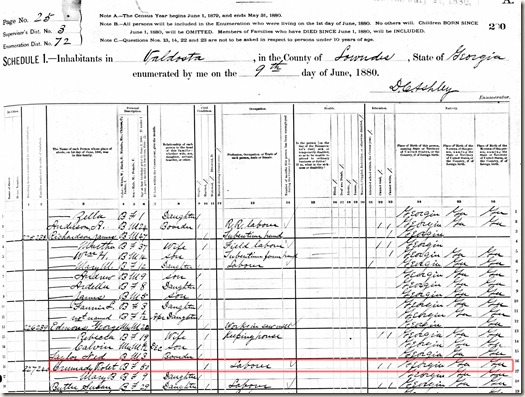 I found several women named Lizzie in 1870 in a search of the census index on ancestry.com.  All but one were born after 1860, not the right age to be the Lizzie with the Pendletons during the Civil War.  The only one that I found who was born before 1860 would have been about 24 in 1864...too young to be called "old" by a 19-year-old William.  I found the same thing in the 1880 census.  Several women named Lizzie are in that census, but most were born after 1870, and the few that were born earlier weren’t old enough to be called "old" in 1864.

I’d like to see if I can get a copy of Philip’s and Catherine’s wills (both died after the Civil War) to see if they possibly left anything to a servant whose name might be noted in their wills.  I would like to find out where Lizzie came from as well as the young boy listed in the 1860 Slave Schedule…Hancock or Ware County?


Posted by Catherine Pendleton at 12:53 AM