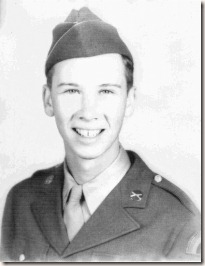 My, how young he looks in this photo…all of 19 years old.  A few years ago, I typed up my dad’s chapter about his service in World War II titled, “The Camp Gruber Blues and Other Travels” for his unpublished memoir, Growing Up South Georgian  (n.d.).  My youngest sister scanned and emailed photos for me to include, and I added some documents that I found on the internet and a copy of his discharge paper.  I made copies of the chapter and sent them to my mom and my brothers and sisters for Memorial Day that year.

My dad never talked about the war much with us.  It was too painful.  He had a daily reminder however…his physical wounds.  I remember only once wishing that he could run and play with me outside.  It had never occurred to me before that my dad couldn’t run until I saw my friend’s dad running around outside with her.  I don’t know why that struck me.  He could do other things…dance, garden, swim, drive a car, and get me out of trees when I was too afraid to climb down.  He even climbed a ladder once to get in my bedroom window when I accidentally locked myself in and couldn’t unlock the door (I was 3 or 4.  I giggled when he came in through the window, but he was not amused).

Camp Gruger, where my dad went for basic training, was in Oklahoma outside of the town of Braggs.  In his memoir, Dad said he was sent to Headquarters Company of the Anti-Tank Platoon of the 333 Infantry Battalion of the 42nd Rainbow Division.   I think he has a typo…I haven’t been able to find anything about the 333 Infantry Battalion.  According to Wikipedia, the Rainbow Division had the 222, 232, and 242 Infantry.


He said he learned to cuss and drink lots and lots of beer while stationed at Camp Gruber, and he was terribly homesick.  It wasn’t too long before he got word that he and several others were being shipped out to Europe as replacements.  They stayed two weeks at Fort Meade in Maryland before boarding a ship to England.  About ten days later, they landed in Glasgow, Scotland, and then took the train into England.  Dad says they went from camp to camp.  One camp was at a little village called Petty Pool or near a golf course called Petty Pool.  I tried finding this place.  There is a Pettypool Hall in Cheshire, England, that served as a command post for the U. S. Army during World War II (http://www.80thdivision.com/80thHistory.htm).  See map below for location.


They had “tea and tidbits,” watched movies, went to a local music concert, and complained about the weak British cigarettes.  Dad and his fellow soldiers eventually made it to the English Channel, boarded a ship, and landed at or near Omaha Beach (marked above on the map).  By this time, he says, the fighting was far inland.  They were loaded onto trucks, and they rode for miles.  He remembered passing St. Lo, a town in France that he had heard about in the news.  It was nearly leveled during the fighting, and it “looked bleak indeed.”


Dad ended up at another camp; he doesn’t say where in France it was located.  One night while guarding an ammo dump and feeling low because he was on guard duty while everyone else was away from camp, he suddenly heard Dinah Shore in person over a loud speaker in the distance singing to some G.I.s.  He felt like she was singing especially to him!  While at this camp, the soldiers had to go through basic training again, “firing, crawling, studying hedgerow fighting on maps, and as much about survival as they could impart to us at that late date.”  They were sent to several more camps and then were told one day that they were going to the front.  They were loaded onto trucks (again!), and they rode for days standing up and hanging onto their gear and guns.  They stopped at a small town and ran up and down the street buying bread and alcohol before boarding a train.  They noticed a man bent over doing something by one of the train cars, dressed scruffily but looking too fit to be a railroad worker.  They didn’t think much about it and joked about sabotage.  Later, their train car turned over, and soldiers fell everywhere; two soldiers were killed when the door flew open.  He says, “We were fatigued and quite destroyed for that night.”  Dad doesn’t say what caused the wreck; I wonder if it was a saboteur.

When the soldiers got to their destination, they were divided up into different infantry divisions.  Dad was sent to the 80th Infantry Division, 317 Battalion, Company I.  Once he was told which division he was to join, he followed the “company runner” past dead German soldiers, up and down hills, across rough terrain, through some woods, and up the hill where his squad was fighting some Germans who were on another hill.  Suddenly shelling began and bullets were whistling past, and he and another new soldier tried to hug the ground.  They couldn’t dig a foxhole like they were trained to do because they were on bedrock!


Later, my dad’s unit was on the move again.  He mentions going to a town where they were told to watch for land mines.  They watched the tanks roll through, then a jeep came through and hit a mine, throwing the soldiers and the jeep up in the air; they fell “like fiddlesticks.”  He mentions that one of his lieutenants, “fresh from Lieutenant School and his mother’s arms” was suspected of shooting himself in the arm so he would be sent home.  There was more fighting against Germans, more crouching in foxholes, more walking and marching, more “going around in circles,” and just generally feeling “very tired and sick at heart.”

They reached Pont-a-Mousson (marked on map above) on the Mozelle River for a few days of rest away from the front, and best of all, they could shower with soap and get some clean clothes.  They left for the front after six days.  The day they left, my dad was very ill (probably food poisoning).  As they marched, he dropped out by the wayside, saying he would catch up.  He lay on the ground and went to sleep (he must have been really sick to do this!).  When he awoke a while later, he hurried to catch up with his unit.  The next night, they were told to tote some pontoon boats “somewhere” which took them several hours.  They had to leave their guns and ammo behind.  Soon, they were caught “in the middle” of the Americans firing on the Germans in the push for the Rhine.  They hit the ground and waited nearly an hour.  Then they turned to go back to where they’d left the boats.  They ran into their own outfit and “plenty of guns.”

They walked slowly, on guard, toward a stream or river.  He remembers “a small, dark sign that said, ‘Morville-sur-Seille’” (see map above).  To their horror, there were their pontoon boats positioned across the river, “our bridge to more war.”  As soon as they crossed the river, the Germans “sent a barrage down on us and the radio man was hit.”  Dad took up the radio since he’d had walkie-talkie training at Fort Gruber.  As they got up the bank, they were hit with another barrage from the Germans, and “shrapnel flew into my leggings, barely scratching the skin of my legs.”  My dad describes what happened next:


We crept forward a little at the time on flat ground in an open field. An airplane strafed us but was way off target. Slowly, we inched forward and were very close to a very small town. The company of men stretched out for yards and yards while we sat or lay down to rest. Then it happened. My whole world blew up.


Dad didn’t know it at the time, but he was severely wounded.  Below is the Morning Report for the 317 Infantry, Company I, dated November 15, 1944.  The bottom of the page records him being wounded on November 9, 1944.  This is a digital copy of a microfilm copy, and as with the document above, I cleaned it up a bit in Photoshop. “Fr dy to SWA” stands for “From Duty to Seriously Wounded in Action” (believed life-threatening). “Lost to Hosp” means he was sent to a hospital, “Hosp. unknown” (from http://80thdivision.com/WebArchives/MorningReports.html). 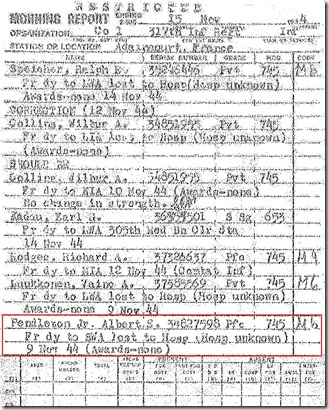 Below is a page from Headquarters 80th Infantry Division General Order 86, dated November 23, 1944.  Dad’s name is in the list of soldiers who were awarded the Purple Heart “for wounds received as a result of enemy action in France on dates indicated” (from http://www.80thdivision.com/WebArchives/UnitHistories.html). 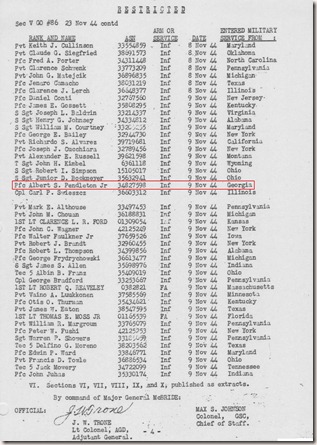 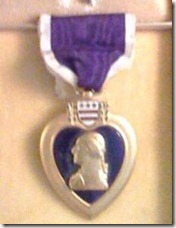 Dad’s Purple Heart (my sister took a photo for me with her smart phone). 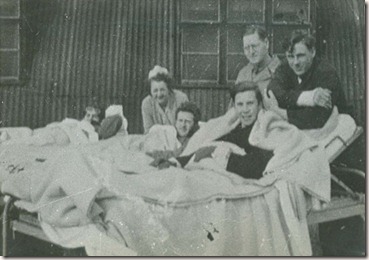 Dad during his hospital stay in England (with Nurse “Mike” who drew him out of a deep depression kicking and screaming). 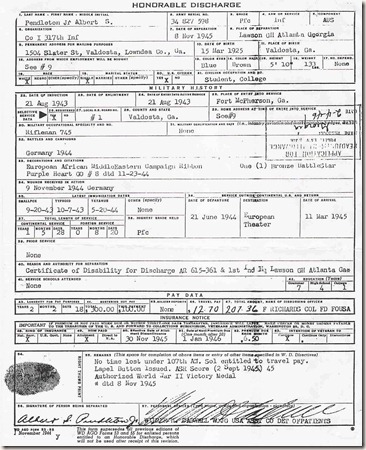 The next chapter in my dad’s memoirs is called “Walking Papers.”  It won first prize in 1968 at Oxford Collect, near Covington, Georgia, at a meeting-workshop with the Georgia Writers Association, and again that fall at the annual meeting in Atlanta, in the category for unpublished writers.  It’s a flashback to the war while waiting in the veterans’ orthopedic clinic for amputees in Atlanta.  He had to go there every so often to get a new prosthesis.  He writes about the explosion that wounded him and about the medic giving him two shots of morphine in his neck and a compress on a wound in his back after telling him he couldn’t do anything about my dad’s legs.  He woke up in the operating room and passed out again, and then later woke up with a cast from the waist down.  The hospital had not told my dad they had amputated his right foot.  So when the Colonel came by for an inspection and the doctor pulled back the covers on my dad’s legs and said “amputation,” my dad went berserk and sank into a deep depression.  Also, the bones in his left foot were shattered; he was told that they would eventually fuse together.  (I remember that he always walked with a sight limp and that he was often in pain.)  He was worried that he would never walk again.  But he did, and he danced, and he swam, and he drove a car, and he mowed the grass, and he lived a fairly normal life (if such can be had with five kids)!

Catherine
Posted by Unknown at 11:35 PM