Veterans Day—Remembering those who served

My dad was a private during World War II and served with the 80th Infantry Division, 317 Battalion, Company I in France.  As I wrote in a previous post [A Wounded World War II Vet: Pfc. Albert S. Pendleton, Jr. (1925-2006)], he didn’t talk much about the war.  He was seriously wounded in France and spent a long time in the hospital recovering.  He had a constant reminder of the war in the pain he endured the rest of his life because of his wounds. I’ve learned more about his experiences in the war from his writings than I ever learned from him directly.  His brother William Frederick Pendleton and his sister Frances Hoyt Thomas (later McLaughlin) both served in the military during World War II. 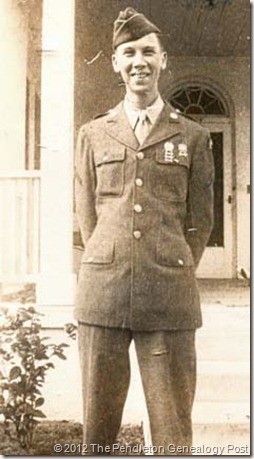 My dad, Pfc. Albert S. Pendleton, Jr.  This photograph was taken at his parents’ home on Slater Street in Valdosta, Georgia. Here is one of the poems that my dad wrote about the war.

I came home to you in Atlantis spring
With heart and soul and bladder brimmed
Of everlasting French rain,
And a memory of claustrophobic earth tombs.
My abode is here because St. Lo disappeared from its stone.
Omaha Beach that summer was not for relaxing tourists.
Now the trek homeward…I see whole buildings
As I glide along
And a dream of a dream of what is left of me
And my quickening heart,
Reborn, but not renewed,
Yet…
What of tomorrow, my young man…What? Tomorrow?
…all I know is I must lose my elephantine memory…
…only to find my candlelit face
In glassy window panes
Reflecting the dream of me
And what I used to be…
Albert Pendleton
July 1978

As you can see from the date, when he wrote this poem the war was still very much a part of him.


Catherine
Posted by Catherine Pendleton at 10:51 AM