This past March when I was visiting Valdosta (before I moved), I scanned all of the family photos that were in my grandmother Leona Roberts Redles’ desk at my mom’s house. Included was a small box/envelope with the unlabeled photographs below. I’m hoping that some Roberts relatives can help me identify these men. I’m pretty sure the man wearing the hat is my great grandfather John Taylor Roberts (1850-1920). Isn’t he handsome?! I recognize that icy, blue-eyed stare from other known photographs of him, but I’d like to know for sure. John had three brothers, William Patrick (1855-1922), Benjamin Hill (1857-1936), and Francis DeVane (1860-1915). Their father was also named William (1828-1903), and their mother was Margaret DeVane (1826-1882).  These five men would account for the five photographs. 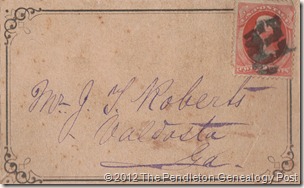 Since the photographs were in this box/enveloped addressed to J. T. Roberts, I assume these are photographs of him, his brothers, and their father. The back of the box says “D. J. Ryan’s” “Art Gallery” “Savannah, GA” 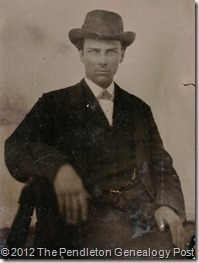 I believe this photo is of my great grandfather, John Taylor (J. T. as he was commonly called) Roberts. This is the only tintype in the box. Love his “I’m handsome and I know it” countenance! 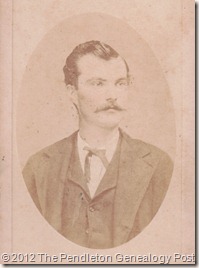 Possibly one of my great grandfather J. T. Roberts’s brothers. The back of the photo says “Ryan” “Savannah, GA” 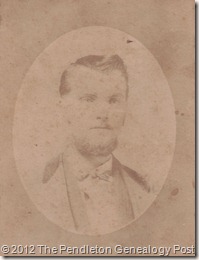 Another brother of J. T. Roberts? The back of this photo says “Brown’s Gallery” “Thomasville, GA” 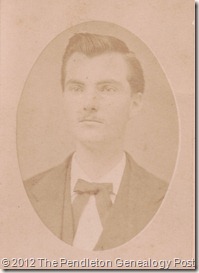 There isn’t anything on the back of this photo to indicate where it was taken.  This man looks very much like William Patrick Roberts whose photograph is in DeVanes 1798-1975, although the photograph in the book was taken when William was older. 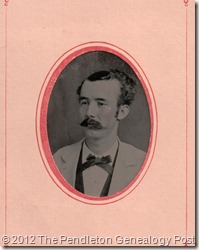 Could this photograph be of their father William Roberts? He looks older than the men in the other photos, but since I don’t know when any of the photographs were taken, this is just a guess.  There is also nothing on the back of this photo about the photographer.

After William Roberts and Margaret DeVane were married, they lived in the part of Lowndes County, Georgia, that later became Berrian County, and that is where their children were born.  Later, several of the Roberts clan moved to Valdosta, Georgia. Any help with the identification of these men in the photographs would be much appreciated!

Posted by Catherine Pendleton at 11:40 AM