The Daughters of Philip Coleman Pendleton

Recently, I found a biographical sketch in my dad's papers that was written in 1911 about my paternal second great grandfather Philip Coleman Pendleton by one of his sons, newspaper editor and publisher Charles Rittenhouse Pendleton. I realized when I read the last paragraph that I knew very little about Philip's daughters, Emma Tebeau Pendleton (1852-1919) and Mary Zella Pendleton (1857-1932). Here is what Charles had to say about his sisters:

The daughters are not married. One of them has been writing the bird stories for The [Macon] Telegraph, and has done other literary work. Both have been teachers--patrons of "female education" which so interested the early manhood and life of their father.[1]

Out of ten children, Emma and Zella were the only daughters of Philip and his wife Catharine Sarah Melissa Tebeau. Emma was born in Powelton, Hancock County, Georgia, in 1852, and Zella was born in 1857 in Sandersville, Washington County, Georgia, the same place where my great grandfather (their brother) Alexander was born. Shortly after the birth of Zella, the Pendleton family moved to the Tebeau plantation outside of Savannah, Georgia.  The following year they moved to a farm at a place they named Tebeauville (now Waycross), Georgia. During the Civil War, they moved again--this time just outside of Valdosta, Lowndes County, Georgia.[2]

Neither Emma nor Zella married. However, it seems that Emma may have been engaged in 1878, but I don't know to whom or why the marriage never took place. I found a clue about this in a letter she wrote in 1879 to a gentleman who was apparently interested in her. She says,

I will be as candid with you hoping to give you as little pain as possible and tell you what I have told no other gentleman who was not a relative and that is that my hand has been plighted to another since July last. I tell you this for your own sake believing that you will not mention it ever and that you have not gone so far that you can think of me now only as a true friend.[3]

Emma and Zella both attended the Girls' School at the New Church in Bryn Athyn, Pennsylvania--Emma from 1891-1893 and Zella from 1889-1893. Zella graduated from the Girls' School in 1892.[4] There's a photograph of her in a write-up about the first graduation held at the school on the New Church History's website. [5] (Click on their name to go to this page. She's on the right in the front row.)

Emma must be the writer who Charles refers to in the above quote from the 1911 article. (See my post The Pendleton Family Curse about the Pendleton propensity for writing.) Below is a document that I found in my dad's papers from Godey's Lady's Book dated 1883 concerning the submission of a story called "Witchery" written by Emma.[6] (Click on the image for a larger view.) 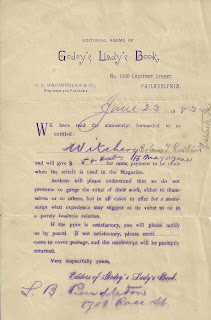 It appears that by 1900, Emma was living in Macon, Georgia, but not with their brothers Charles and Louis who were also living there (I couldn't find her in the 1900 census). Zella was living in Canada. I found their names listed under these locations in a transcription of a document about a church assembly held in 1900.[7] By 1910, both Emma and Zella were living in Bryn Athyn, Pennsylvania, where three of their brothers (William Frederic, Nathaniel Dandridge, and Louis Beauregard) were living. They lived with their brother Louis, who was a novelist, journalist, and newspaper editor.[8]

I found several articles on genealogybank.com from The Macon Telegraph that were written by Emma in 1910 and 1911, most of which are the bird stories mentioned by Charles in the quote above. Some of the titles are "Birds of a Feather," "Birds of a Color," "Common Bird Neighbors," and "The Wood Warblers." Here is an excerpt from one of her "Birds of a Color" articles about a robin:

He was here the other day hopping about in the beautiful autumn sunlight as dainty and charming as ever he was in the good old summer time. And though late in the fall his tendency is to take on a slightly rusty wash , especially towards the tip of his pretty wings, yet in this golden sunlight he was still a symphony in blue and white and reddish brown.[9]

Another story, written by Emma in two parts, is "Music Mad: A Picture From Life," about a young musical prodigy who was so enraptured with the music she played that she was driven a bit mad. [10]

Emma died in 1919, and Zella died in 1932. Both are buried in the Bryn Athyn Cathedral Cemetery, Bryn Athyn, Pennsylvania.

[7] Journal of the Fourth General Assembly of The General Church of the New Jerusalem, 1900; digital image, heavenlydoctirnes.org (http://www.heavenlydoctrines.org/New%20Church%20Life%5C1900_HTML.htm : accessed 4 February 2013).

Posted by Catherine Pendleton at 3:00 PM