My maternal grandfather, William (Will) Liming Redles began writing to my grandmother MarthaLeona Roberts in the latter part of 1921/early 1922 after his friend Warren Graham (who was married to Leona's sister Margaret Roberts) had given him a photo of her. Will was instantly smitten. In January 1922, Warren wrote to his sister-in-law Leona that he believed Will was in love with her. After several months of letter writing, the day finally came when Will would get to see her face to face.

An officer in the U.S. Marine Corps, Will was granted leave in August 1922 from the Office of Naval Intelligence in Washington, D.C. Warren invited him to Valdosta, Georgia, where the Roberts family lived, for a visit. What an opportunity! Will wrote to Leona that he'd like to see her while he was there, so he boarded a train and made a bee-line to Valdosta.  Seeing her in person seemed to make him more sure than ever that she was the one he wanted to spend the rest of his life with. When his visit came to a close and his train left the Valdosta station, he began writing her another letter. In it he told her that he planned to head on to Philadelphia to see his sisters Isabelle and Helen after a brief stop-over in Washington to "get some clean uniforms." Once he got to Philadelphia, he mailed a "Souvenir Folder" to her that contained illustrations of several Philadelphia places of interest. He wrote the date on the inside flap of the envelope: August 20, 1922.

Will often asked Leona to visit him in Washington, but she wasn't taking him up on it. She had a friend living outside of Philadelphia, so he told her to make it more comfortable for her, why didn't she visit her friend, and he could head over from Philadelphia to see her. Was the souvenir folder an enticement to get her to come to the city? 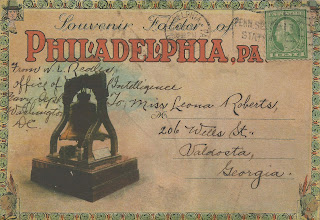 Below are a few of the illustrations in the Souvenir Folder. I've included a transcription of the building descriptions printed in the back of the folder. 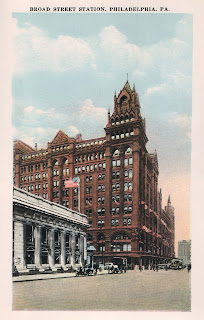 
"Broad Street Station is the terminus of the Pennsylvania Railroad in Philadelphia and also the home of the wonderful Pennsylvania System." 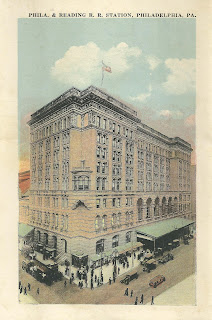 "The Reading Terminal is located at 12th and Market Streets, in the heart of the city. It is the terminus for the Philadelphia & Reading Central R. R. of New Jersey and Lehigh Valley Railroads." 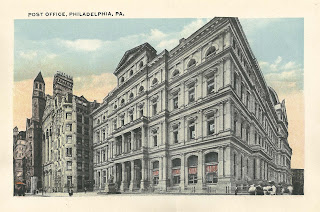 "The Post Office is located on the corner of Chestnut and 9th Streets and extends along 9th Street to Market St. It is built of pressed granite, four stories high, and is surmounted by a dome reaching 170 feet above the pavement. Total cost $8,000,000." 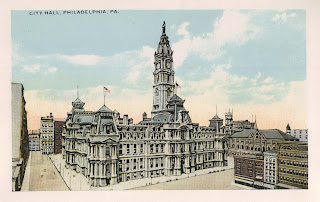 "City Hall located at Broad and Market Sts., is a structure of immense size and prominence, costing about $20,000,000. The tower is 550 feet high and surmounted by a huge statue of William Penn, the founder of Philadelphia." 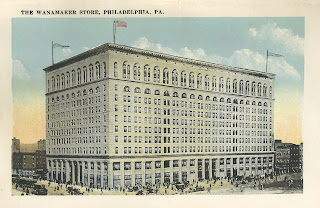 "The Wanamaker Store occupies an entire city block from Chestnut to Market Sts. Between Thirteenth & Juniper Sts. The Building is twelve stories high, three stories below the street level and contains 45 acres of floor space."

I wonder if the Philadelphia & Reading Railroad Station is the one he arrived in and departed from. Or could it have been the Broad Street Station? Did he shop at Wanamaker's? Is that the post office from where he mailed his letters to my grandmother while in Philadelphia? Did he have business in City Hall?

I loved looking through the illustrations of what my grandfather's Philadelphia looked like. In the absence of actual photographs in his papers, these vintage cards helped give me a sense of what his surroundings were like while he was there.

I love these vintage cards! I have several of Valdosta. I think I'll see if I can find any of Washington, D.C., and of other places he lived.

Letters and papers of William Liming Redles and Leona Roberts Redles are in the possession of their oldest daughter Leona Redles Pendleton.

Posted by Catherine Pendleton at 8:56 AM