This Valentine's Day card postmarked February 14, 1923, is from my maternal grandfather William (Will) Liming Redles to my grandmother Martha Leona Roberts while they were courting (long distance much of the time). He was in Washington, D.C., and she was in Valdosta, Georgia. One of my grandfather's friends, Warren Graham, was married to my grandmother's sister, Margaret. Warren sent Will a photo of Leona in about 1921, and Will fell in love. 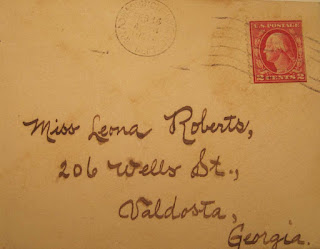 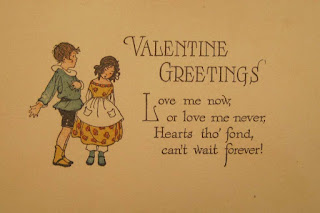 Even though he didn't sign the card, I recognize his neat, precise handwriting on the envelope. I suppose he was getting tired of waiting for her to declare her feelings for him. He sent three letters to her around this date saying as much. In one, he says he has something very important to say to her. He didn't have to wait much longer. They were married just over two months later on May 8, 1923, in Bryn Athyn, Pennsylvania.

Happy Valentine's Day Will and Leona!

Posted by Catherine Pendleton at 11:25 AM