Well, so much for my ambition of posting every day about my journey from Alaska back to Georgia by car with my Aunt Catherine. I had good intentions. When I asked the desk clerk at the hotel in Whitehorse, Yukon Territory (our first stop in Canada), for the wifi password, she told me that the internet had not been working that day, and as she handed me the password, she said, “Well, it’s the Yukon.” I know what she means. The same could be said about several of the places I’ve been in Alaska. The internet isn’t always available, or if available, not always working.

The Alaska Highway was built during World War II after the Japanese attacked Pearl Harbor. It’s in much better condition now than it was then. My hat is off to the soldiers and civilians who constructed this highway and to the crews who have maintained and built new sections of the highway since then. It’s now paved all the way from Delta Junction, Alaska, to Dawson Creek, British Columbia, although parts of it are in need of some attention. Better watch for those frost heaves.

The scenery along the highway is breathtaking. We had wonderful weather the whole way. 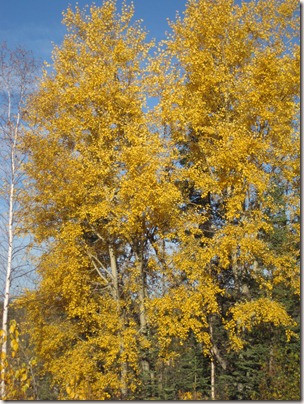 There’s gold in them thar hills! Gold leaves, that is. Fall has arrived in the North. Taken “somewhere” on the Alaska Highway. 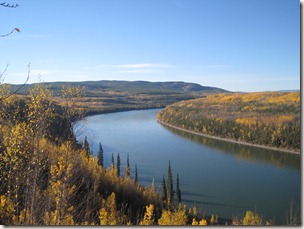 View of the Liard River at Historical Mile 570, Allen’s Lookout, on the Alaska Highway. A stone cairn at this pull-out is dedicated to the surveyors of the highway.

After crossing the Canada/Alaska border, we spent our first night in Whitehorse, Yukon Territory, on the Yukon River. Gold discoveries in the Klondike in the late 1890s set off a gold rush, bringing miners and entrepreneurs to this area. 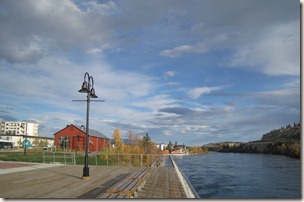 Along the Yukon River in Whitehorse, Yukon Territory 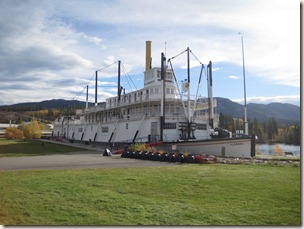 The SS Klondike National Historic Site in Whitehorse, Yukon Territory. This sternwheeler was built in 1929 by the British Yukon Navigation Company 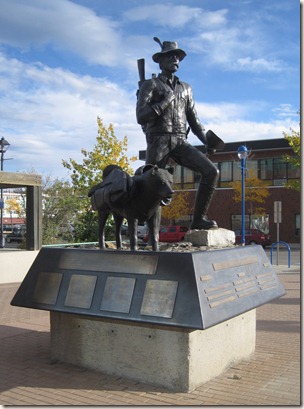 The Yukon Prospectors’ Hall of Fame in Whitehorse. 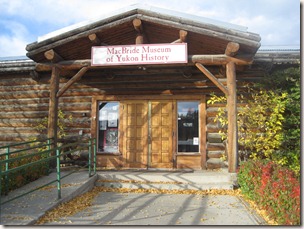 The museum is closed on Mondays, our only day in Whitehorse.

After visiting downtown Whitehorse, we hopped in the car and headed to Watson Lake, Yukon Territory, our next stopover.

P.S. If you decide to drive to Alaska, you must get a copy of the Milepost travel planner. It’s a wonderful “mile-by-mile” highway log of highways in Alaska and includes the Alaska Highway from Dawson Creek, British Columbia, to Alaska. I didn’t know there were ipad and android apps available until we had finished traveling this highway. Not sure how useful they would be as most of the Alaska Highway has no cell phone service except in the towns along the way.

Posted by Catherine Pendleton at 1:42 AM