More about Traveling the Alaska Highway

Now that I’m getting resettled in my home town of Valdosta, Georgia, I’m ready to return to writing about my drive from Alaska to Georgia with my Aunt Catherine. What an awesome, enjoyable, long, tiring journey it was! I’m so glad I did it. My Aunt Catherine is an excellent navigator! We drove from six to eight hours a day and stayed in a different town each night. We would laugh when we couldn’t name them all, much less name the states and provinces that we passed through. We left Anchorage, Alaska, on September 22, 2012, and arrived in Valdosta, Georgia, on October 7, 2012. For my previous posts about our journey, see Wagon Ho! Anchorage to Tok and Traveling the Alaska Highway.

After leaving Whitehorse, Yukon Territory, we crossed the Continental Divide in the Rocky Mountains near Historic Milepost 722. The Continental Divide separates the Yukon River and MacKenzie River watersheds. We thought this was really cool, so we stopped to take a look. It was hard to fathom that we were standing on the Continental Divide. There was nothing that we could see from our vantage point that was different. I guess I expected something much more dramatic. We laughed, read the signs, and got back in the car.

We continued on to Watson Lake, Yukon Territory, where we spent the third night of our journey. Watson Lake is the home of the signpost forest which was begun by World War II soldier Carl K. Lindley while building the Alaska Highway. I didn’t see a sign from Valdosta but saw one from Augusta, Georgia, and a Georgia Bulldog license tag. I should have been prepared and added one for Valdosta! Oh well—next time. 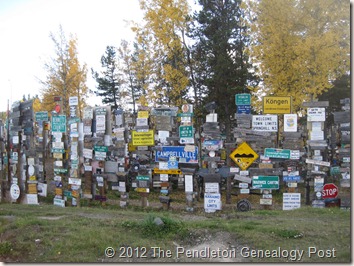 Just a small section of the signpost forest in Watson Lake, Yukon Territory.

We were up again early the next morning, and once we’d eaten breakfast and gassed up the car, we were back on the Alaska Highway, heading for Fort Nelson, British Columbia, our next overnight stop.  Shortly after hitting the road, we saw a lighted sign over the highway that warned of bison on the road. Just a few miles later, we saw two small herds of bison and the occasional single bison slowly walking down the side of the Alaska Highway. 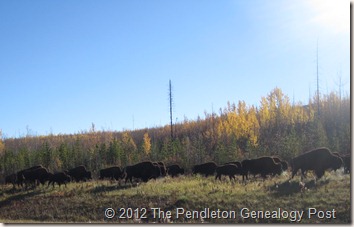 Bison along the side of the Alaska Highway between Watson Lake, YT, and Fort Nelson, BC.

On the way to Fort Nelson, we stopped in at Liard River Hotsprings, because so many people in Anchorage told me that we should stop there. Neither one of us had a bathing suit (nor would I be caught dead in one), so we stayed just long enough to say that we stopped and saw the hotsprings. We had a nice picnic lunch in the warm sunshine near the campground and then walked down the boardwalk to the hotsprings. There was a construction crew rebuilding the deck at the hotsprings, and a few people were enjoying the warm water. I took a photo of the sign to prove we were there. 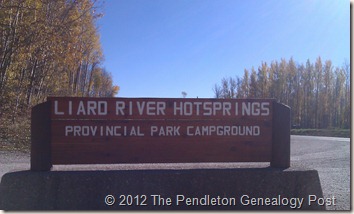 Liard River Hotsprings sign. Proof that we stopped there.

Soon, we were in the Canadian Rockies. I was fascinated by their folded appearance!  According to the sign at Folded Mountain, the Canadian Rockies “buckled into folds” when the continental shelf was squeezed as the North American continent pushed into an “offshore chain of islands” about 175 million years ago. 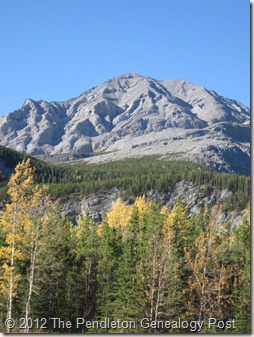 Folded Mountain in the Canadian Rockies between Watson Lake, YT, and Fort Nelson, BC.

By the time we got to Fort Nelson, we had traveled a total of 1,308.4 miles since leaving Anchorage, Alaska. After spending our fourth night of our journey in Fort Nelson, we headed to Dawson Creek, British Columbia, and the end of the Alaska Highway for us, but not the end of our journey by any means. It was a short driving day, so we had some daylight left to walk around a bit.

Dawson Creek, British Columbia, shares something with Valdosta, Georgia,—the citizens of the town moved to be near the railroad. Dawson Creek is also Mile 0 of the Alaska Highway and where the U.S. Army began building the highway in 1942 after the bombing of Pearl Harbor.

This Mile 0 sign was built after the original sign was damaged by a car in the 1940s. This sign sits in the center of town to commemorate Dawson Creek’s role in the construction of the Alaska Highway. 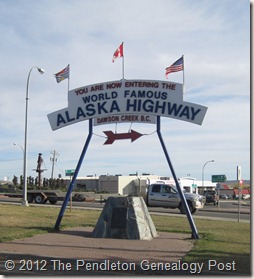 Mile 0 of the Alaska Highway.

I have to say that driving the Alaska Highway was the easiest part of our journey. There is only one highway to follow from Alaska to Canada (and vice versa), and this is it! There were a few sketchy places as far as road conditions were concerned, but we had wonderful weather and exquisite scenery the entire way from Tok, Alaska (where we got on the Alaska Highway), to Dawson Creek, British Columbia.

Posted by Catherine Pendleton at 10:52 PM