The Rest of the Journey, Part 1—Alaska to Georgia

Along with my good intentions of writing blog posts in the evenings about our day’s adventure during our journey from Alaska to Georgia (I only wrote a couple), I planned on keeping a trip journal. I have only three entries. I was too tired at night to write after driving all day. Plus, I would spend the evenings after dinner looking over the maps for the next day’s travels (just to see what it entailed), looking for hotels and making reservations a day or two out, and writing updates on Facebook and Twitter (I usually did this during dinner). Aunt Catherine was good about writing down the day’s adventures each night, though. (For my previous posts about our travels, see Wagon Ho! Anchorage to Tok, Traveling the Alaska Highway, More About Traveling the Alaska Highway.)

I’d like to say a huge “Thank You!” to my “northern” Pendleton/Young cousin, Alan Pendleton, who mapped our route from Dawson Creek to Valdosta for us (see Google map below). He sure took us through some beautiful, scenic routes! We never got tired of looking at the scenery! 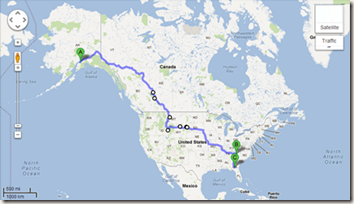 Google map of our original route (changed only slightly once we started traveling). 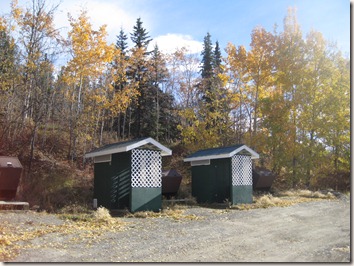 Above are outhouses at a rest stop along the Alaska Highway in Canada. The ones in the national parks were nicer. Yes, we compared outhouses. Also, there seemed to be more of them on the Canadian part—a fact that I especially appreciated—than on the Alaskan part which were seemingly few and far between.

Once we left the Alaska Highway, I got a little nervous. I felt secure knowing where we were going as long as we were on it. For over 1,000 miles, I didn’t have to get onto another highway. In my previous post, I mistakenly said this is the only highway from Alaska to Canada. What I should have said is that it’s the only one we could travel in the direction that we were going—to Dawson Creek, British Columbia. After Dawson Creek, and leaving the Alaska Highway, we had to pay attention to road signs to make sure we got on the right highways here and there. I wondered at various times on our journey how our ancestors moved as often as some of them did and traveled as far as they did. They didn’t have paved roads, free maps from the American Automobile Association, GPS, and smart phones! I can’t imagine traveling (even for just 50 miles) in a covered wagon and or having to blaze my own trails. Sometimes, though, I wished we were in a covered wagon and could just pull off on the side of the road for the night, cook dinner, and sleep. I guess an RV would serve this purpose, but I don’t think I could have driven one on the narrow, curvy mountain roads! 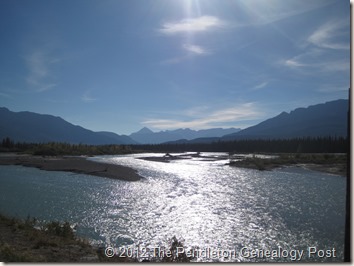 Our next beautiful drive took us through Jasper National Park (see above photo)! We spent our sixth night in Jasper, Alberta, and we arrived early enough to spend a little time walking around downtown before dinner. The next day we drove through Banff National Park on our way to Calgary, Alberta, where we spent our seventh night.

After leaving Calgary the next morning, we took a detour to visit Head Smashed In Buffalo Jump (at the suggestion of a colleague), a World Heritage archaeological site west of Fort MacLeod. It happened to be the center’s 25th anniversary celebration weekend, so we got in for free. I love how the Interpretive Center building seems to be carved out of the rocky hillside. The displays in the center are designed to be viewed from the top of the building to the bottom/ground floor, and they tell about the Blackfoot people and the buffalo hunt. We walked out to the observation deck to get a view of the buffalo jump. 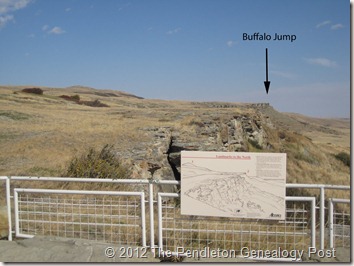 We crossed back into the United States at Sweet Grass, Montana, on Interstate 15. Getting through Customs was a breeze. Once again, we just stayed in the car, handed over our passports to be scanned, and answered a few questions. We drove on to Butte, Montana, where we were staying our eighth night. I regret planning to drive as far as we did that day. I miscalculated how much time we had for visiting Head-Smashed-In Buffalo Jump in Alberta (an unplanned stop) and still get to Butte before dark. We were still on the highway when the sun went down (here’s when I wished for a covered wagon to sleep in for the night), and I don’t like driving in the dark—night blindness—especially on unfamiliar roads, and curvy mountain roads at that! I worried out loud the entire way to the hotel. I swore that I would not drive in the dark again on this trip. (Yet I did it one more time!)

The next post will wrap up this once-in-a-lifetime (for me, anyway) journey!