In the November 27, 2011, Ancestry.com Weekly Discovery email newsletter, there was an article by Juliana Smith about U.S. Seamen’s Protection Certificates.  According to Ms. Smith, these were issued to American sailors in the late 18th and early 19th centuries to protect them from being removed from American ships and impressed into service by the British, which was one of the causes of the War of 1812.  Ancestry.com has certificates available for the years 1792-1868 for the ports of Bath, Maine; Portsmouth, New Hampshire; New Orleans, Louisiana, and Philadelphia, Pennsylvania.  These certificates include a physical description of the sailor, when and where he was born, and the signature of a witness (possibly a relative) attesting to the truth of what is in the document.  Smith also points out that there are several African American sailors in the collection whose certificates would be very useful for researching African Americans during this time period due the scarcity of other records. [This post was originally published in December 2011. When I updated it in Windows Live Writer to “fix” the position of the images, it was posted again with today’s date—July 28, 2013—by mistake.]

Seamen’s Protection Certificate for William Liming
My maternal 2nd great grandfather William Liming was a sea captain and was born in Philadelphia around 1795 [1].  He died in Mt. Holly, New Jersey, on January 13, 1873 but is buried in Philadelphia at the Old Swedes Ground, Gloria Dei Church [2].  We haven’t been able to find out who his parents were, so I was not only hoping there was a seamen’s certificate for him but that a relative was the witness.  Below is a Seamen’s Protection Certificate that I found for a William Liming. 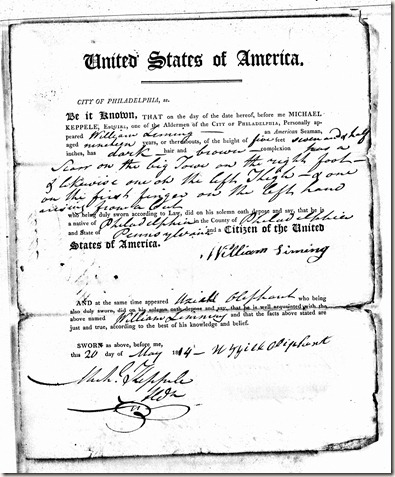 Below is a transcription of the above certificate.  The handwritten parts are in italics:


City of Philadelphia
Be it Known, that on the day of the date hereof, before me MICHAEL KEPPELE, Esquire, one of the Aldermen of the City of Philadelphia, Personally appeared William Liming – an American Seaman, aged nineteen years, or thereabouts, of the height of five feet seven and a half inches, has dark hair and brown complexion has a scar on the big toe on the right foot & likewise one on the left thigh—& one on the first finger on the left hand arising from a cut who being duly sworn according to Law, did on his solemn oath depose and say, that he is a native of Philadelphia in the County of Philadelphia and State of Pennsylvania and a Citizen of the United States of America.
s/n William Liming
AND at the same time appeared Uziell [?] Oliphant who being also duly sworn, did on his solemn oath depose and say that he is well acquainted with the above named William Liming and that the facts above stated are just and true, according to the best of his knowledge and belief.
SWORN as above, before me, this 20 day of May 1814 s/n Uzziel Oliphant
s/n Michael Keppele

The age of 19 would make this William’s birth year about 1795 which fits our William as well as the birth place of Philadelphia.  I’m surprised that they didn’t ask for eye color on the certificate.  Brown complexion?  Could that be from being outdoors on ships or in the shipyard or from his genetic heritage?  I don’t know who the witness Uzziel Oliphant is. It’s not a name I recognize from my research into the Limings, so I looked up a certificate for him, too.

Seamen’s Protection Certificate for Uzziel Oliphant
I found a certificate dated 1813 that I believe is for Mr. Oliphant as the signature looks similar to the one on William’s.  This helped verify the spelling of his first name as “Uzziel” as I had a bit of trouble deciphering it in William’s certificate. 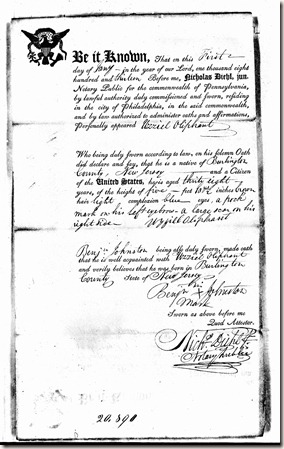 Mr. Oliphant’s certificate (to the left) does note his eye color (blue).  His witness was a Benjamin Johnston. Neither of these names are familiar to me.  Maybe these are sailors just vouching for each other as I found two other certificates (both dated 1810) that have Mr. Oliphant as the witness.  I found him in the 1810 Philadelphia census (took some searching as his name was indexed incorrectly on ancestry.com) [3].   His occupation is listed as stevedore.  That’s the first census record that I’ve seen from that time period that lists the occupation!  I found a death record for a “Uzibe” Oliphant on ancestry.com with a year of birth as 1775 which fits Uzziel Oliphant [4].  Date of death is May 6, 1819, in Philadelphia; he is buried at the First Reformed Dutch Church.  Ancestry.com has the Pennsylvania Vital Records Volumes I, II, and III online [5].  On page 646 of Vol. III,  there is a listing for Uzziel Oliphant with a death date of May 7, 1819, but with a question mark next to the passage “in his 11th year.”  It should probably say “in his 44th year.”  I haven’t found any other record for Mr. Oliphant nor have I been able to find a connection between him and William Liming.  (Note:  I found no Limings in the Pennsylvania Vital Records indexes.  Found a couple of Lemons/Lemmons, though, but could not make a connection to my Limings.  My aunt told me once that a couple of variations of Liming are Leming and Lemon. )

Seamen’s Protection Certificates for Other Sailors Named Liming
I searched for just the last name of Liming to see who would pop up.  Below are a Seamen’s Protection Certificate dated 1796 for a John Liming born in New Jersey (no age listed), and one dated 1831 for a “Devilda” Liming age 21-22, born in Philadelphia.  (Through some searching on the web, it seems that “Devilda” might be “Dewilde”.) 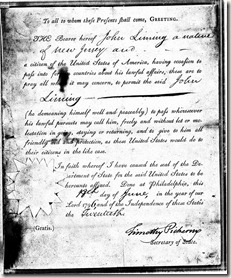 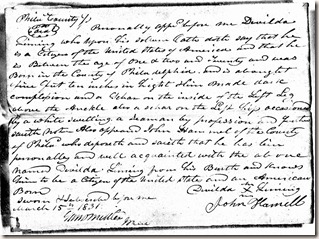 Seamen’s Protection Certificate for Devilda or Dewilde Liming.  Note that the witness John Hamell claims to have known him since birth.

Conclusion
I’d like to think that the U.S. Seamen’s Protection Certificate above for William Liming is for our William, but so far I haven’t found anything to confirm this aside from the year and city of birth.  I’d like to know who Uzziel Oliphant is and what his relationship to William was (employer? relative? fellow sailor?).  I searched for a connection between William, John, and Devilda/Dewilde Liming and between John Hamell and Devilda/Dewilde but haven’t yet found any.  The name “William Liming” seems to be a fairly common family name in 18th and 19th century Philadelphia, Pennsylvania, and Mt. Holly, New Jersey, and they may all be from the same clan.  All in all, while I didn’t find any clues as to our William Liming’s father, I did find the U.S. Seamen’s Protection Certificates fascinating to read, and I believe they would be very useful for family research!

Email ThisBlogThis!Share to TwitterShare to FacebookShare to Pinterest
Labels: Liming