Lisa Alzo of The Accidental Genealogist wrote a post for Women’s History Month titled “Fearless Females: 31 Blogging Prompts to Celebrate Women’s History Month.” There is a topic for each day of the month of March to commemorate the “fearless females” in our families. I planned to follow along from March 1, but I got behind getting ready around that same time for my trip to my home town to visit family. I checked to see what today’s topic (March 11) was and saw that it was to honor a “fearless female” who “died young or from tragic or unexpected circumstances.” I immediately thought of the post below. I wrote it months ago but was hesitant at the time about posting it. Now is a good time.

On one of my visits home to Valdosta, Georgia, a year or so before my father died, he asked me to look for his memoirs, Growing Up South Georgian (n.d.).  (He was bedridden with Parkinson’s Disease and couldn't look for them himself.)  It seemed to weigh on his mind not knowing where they were.  It took me a little while, but I found most of his memoirs scattered around his office.  He asked me to read them and then put them somewhere so they would be found when we were ready to make copies to give out to family.

I must not have read all of the chapters at the time or maybe this particular chapter about the circumstances surrounding the death of my paternal great grandmother Hattie (Finney) Brown was one I found later, because it sure came as a shock when one of my cousins told me how she died.  Another cousin (or maybe it was the same one...I've since forgotten) sent me some newspaper clippings about it.  I wondered why I had not heard about this before. Why didn't my father tell me?  How could I have missed this in his memoirs?  A couple of years ago, I started retyping and editing my dad’s memoirs, and I came across what he wrote about Hattie's death at the end of one of his chapters (below is her death certificate):


Just recently, I was reminded of just how Mama Gangie [Hattie] died.  Papa Gangie [Henry] thought he heard someone after his chickens one night, got up to see and shot Mama Gangie accidentally.  He was arrested and released but not before the newspapers had a field day with it.  Mama Gangie died instantly.  About five years ago one of Aunt Lucy’s [Brown Ward] sons told me that Papa Gangie was a bootlegger and thought someone was after his moonshine, that Hoyt [Hattie and Henry's son] was there one day in 1933, had an argument with him, and left in a huff in his truck, but first he backed over Papa Gangie in the yard.  Mama kept a lot from us.  That was her right.

My father wrote that Hattie and Henry lived in a place called Brownsville outside of Pensacola, Florida.  Hoyt was my grandmother Helen's twin brother and was at Hattie and Henry's when Hattie was shot.  She died right in front of him.  Henry met with a tragic end, too.  My father writes in Growing Up South Georgian (n.d.) about the death of Henry,  "Papa Gangie died when a kerosene lamp blew up and he didn't survive the burns." 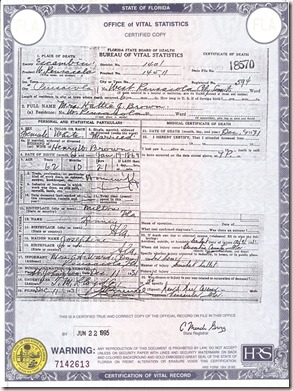 Lisa asks in today’s blog prompt, how did this death affect the family? I wish I knew. I know how it affected me when I found out about it. After I told one of my cousins about Hoyt backing over his father Henry with his truck, he said there was probably no love between them after Hattie’s death. Sometimes in researching family history, you find out things you'd rather not know.  I try not to pass judgment on how my ancestors lived their lives or on the things that they did.  It's not easy sometimes, though.  After I found out how my great grandmother Hattie died, I didn't want to know anything about my great grandfather Henry. I was angry with him for what he did even though it was ruled an accident. However, later on I began to wonder about this family and wanted to know more.  What were their lives like?  Why did Henry have moonshine still (silly me)?  I don't even know what Hattie and Henry looked like.  I came across a wedding photograph on ancestry.com of their daughter Belle and her wedding party.  There are some older couples in the photo, but the person who posted the photo didn't know if Hattie and Henry are in it.  I'm sure they are, but which couple are they?  My cousin showed the photograph to his mom (my father's sister).  She was pretty sure she'd picked them out.  My father didn't seem to know a whole lot about them, so I hope one day that a descendent of Hattie and Henry will fill in the blanks for me.