Lisa Alzo of The Accidental Genealogist wrote a post for Women’s History Month titled “Fearless Females: 31 Blogging Prompts to Celebrate Women’s History Month.” There is a topic for each day of the month of March to commemorate the “fearless females” in our families. The topic for March 26 is the sort of education your mother, grandmothers, or great grandmothers received. Four generations of females on my mother’s side have graduated from college: my daughter, me, my mother, and my maternal grandmother. 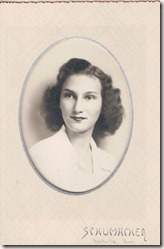 My mother Leona (Redles) Pendleton graduated from Ward Belmont a junior college in Nashville, Tennessee. She then graduated in 1947 with an art degree from Georgia State Woman's College (now Valdosta State University). After the closure of our family business (The A. S. Pendleton Company in Valdosta, Georgia) in the early 1970s, she enrolled in Valdosta State College (now University) for a nursing degree. She worked as a Registered Nurse at South Georgia Medical Center in Valdosta for 13 years before retiring.

My grandmother Leona (Roberts) Redles graduated from Ward Belmont. Her father, J.T. Roberts, sent all of his children—both boys and girls—to college (except for daughter Edwina Roberts who was an invalid), as education was important in the Roberts family. The photo at the left is my grandmother Leona’s senior picture in the 1914-1915 Ward Belmont yearbook. She was a member of Sigma Iota Chi, Beta Chapter.

Growing up, education was important in my family, too. Both of my parents expected me to go to college. However, I didn’t want to go to college after high school, so I didn’t. I said I would “never” go. I was done with school. Famous last words. I entered college when I was in my 30s. It took me a while to finish, alternating between going full time and part time. Not only did I get a bachelor’s degree, but I got a master’s degree as well.