Recently, Caroline Pointer of For Your Family Story tweeted updates on Twitter as she researched the people whose names she found on some vintage postcards purchased at an antique store.  It reminded me that one of the 20-some-odd Valdosta postcards I bought several years ago during a postcard-buying frenzy on Ebay was postmarked and had a note and an addressee, so I dug it out to see if I could find out anything about the sender and the receiver.  (Thank goodness it wasn’t one of the ones I framed!).  I remember wondering at the time who this person was that stopped in Valdosta on his or her way somewhere and bought and mailed a postcard.  That’s as far as my curiosity went at the time, and I tucked the postcard away. 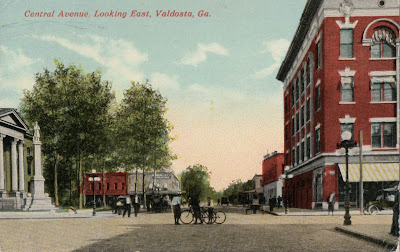 This is the front of the postcard.  It says “Central Avenue Looking East, Valdosta, Ga.”  This is the intersection of Patterson Street and Central Avenue.  Valdosta folks will recognize this area immediately, as the buildings still pretty much look the same with a few alterations.  (Note:  This postcard is postmarked 1921 and is in the public domain as it was printed before 1923.) 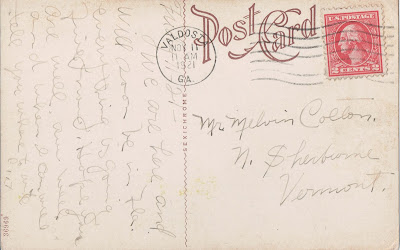 The postcard is addressed to Mr. Melvin Colton, N. Sherburne, Vermont.  (At first, I thought the city was Sherborne until I looked Melvin up on ancestry.com.)

Who signed it??  It looks like just initials—maybe the initial “C”, then a line or accidental pen stroke, and then what looks like a square.  There are only two other places in the postcard where a “C” is written to compare.  None of them look the same, but they all have a loop at the top.  Then I thought maybe it was an “A” but couldn’t decide even after comparing it to other “A”s on the card.  And what about that symbol that looks like a square?

The Family of Melvin Colton

I found a Melvin Colton, age 55, in the 1920 Sherburne, Rutland County, Vermont, census [1].  Besides Melvin, the household includes his wife Ruth (age 52) and sons Charles (age 23) and Harry (17).  So he has a son whose first initial is “C”.  Could that be who sent the postcard?  Could the initial and square mean C-squared for Charles Colton (two Cs)?  If it’s from Charles, why didn’t he address it to both of his parents?  Maybe Mrs. Colton was with Charles.  The author of the card does say “we,” so he/she isn’t traveling alone.  I wondered if maybe Mrs. Colton had passed away by 1921, but no, according to her death certificate, she lived until 1968 (she was 94 when she died) [2].  Why was this person traveling to Florida in November?  To visit family for Thanksgiving?  Moving out of state?

I checked to see where Melvin’s wife Ruth was born.  Maybe she was from Florida.  She is listed as Ruth Pollard Colton on her death certificate and place of birth is noted as West Virginia [7].  Her father was Joseph Pollard and her mother was Myra (no maiden name given).  I found her with her parents in the 1880 census for Clarksburg, Harrison County, West Virginia [8].  This census page is nearly illegible, but it looks like is says they were all born in Vermont, although it’s been indexed as Virginia on ancestry.com.  I can’t read the names of Ruth’s siblings.  They’ve been indexed as A. A. (son) and Mary A. (daughter).

Back to Melvin Colton, the addressee on the postcard.  He’s in the 1870 Sherburne, Rutland County, Vermont, census with his parents Jonathan and Amanda [9, 10]. Melvin’s name is indexed incorrectly on ancestry.com as “Melvern” (I put in edits on ancestry.com whenever I find these types of errors.)  He has a sister named Addie (age 17) and a brother named Oscar (age 19).  Could the initial on the postcard be an “A” or an “O” instead of a “C”?  I found brother Oscar Colton’s death record on familysearch.org [11].  He died in Sherburne, Vermont, on December 20, 1905, so the postcard obviously isn’t from him.  Their sister Addie Colton married Charles W. Boutwell on September 18, 1880 [12].  Charles Boutwell died six years later in 1886 [13].  I haven’t found any other information on Addie—no death record, no other marriage record, no other census record.  I feel that I can’t rule her out yet as the sender of the postcard.  Alas, my search ended here.

I love mysteries, but I love solving them even better!  Wish I could have solved the mystery of the sender of this postcard.

*Update—I should add that I’m not certain that I found the correct Melvin Colton.  Genealogists know how that goes.  You chase somebody through the records certain it’s “your” person only to find out in the end that it isn’t.

**Update--Keith Bollman found this post while researching his wife's Colton connections and told me where Melvin's grandson lives. I plan to send this postcard and a copy of this post to him. Thanks, Keith!