I’ve been curious about the story of the Ostman family of Boston, Massachusetts, ever since I learned of them a couple of years or so ago.  A cousin of mine, who has been researching the parentage of our mutual great grandmothers (Kate and Hattie Finney), had looked into a George H. Ostman as a possible father to Kate and Hattie.  I won’t go into the whys and wherefores  of why George H. Ostman from Boston (maybe in a later post), but as I read through my cousin’s research, I was struck by the events in the lives of this family.


George’s parents were Peter Ostman and Catharine (or Catherine) J. Beavon.  Peter was born around 1813 in Sweden [1].  At some point, he ended up in Scotland where he probably met Catherine.  Born about 1817, Catharine was the daughter of James and Jane Beavon [2].   (Her mother was probably Janet McKechnie [3].) Catharine was likely born in Scotland but several records say England and some say Scotland.

The 1850 census lists Peter’s occupation as a rigger [10].  According to wikipedia, a rigger worked with the ropes hoisting the sails on ships; they also used their skills to lift heavy freight with ropes.  Several of the Ostmans’ neighbors had jobs in shipping:  two were riggers, two were seamen, one was a stevedore, and one was a shipwright [11].

Several tragedies befell this family in quick succession a few years after they arrived in the U.S.  Daughter Elizabeth was about 11 years old when she died on May 10, 1850 [12].  Just two months later, Peter Sr. died as the result of an accident on July 18, 1850 [13].  Catharine was pregnant with their son John when Peter died; John was born the following January 1851 [14].  Three years after the death of her husband, son Peter died of cancer on August 1, 1853, at the age of 12 [15].  A little over a year later, on September 23, 1854, Catharine married Andrew Swan, a mariner from Glasgow, Scotland [16].  By the 1855 Massachusetts state census, the only one of her children living with her and her new husband is her son John Ostman [17].   Catharine is listed in the 1857 Boston Directory as Catharine Ostman, widow [18].  The marriage to Andrew was either very short lived or he had died by this time.  I haven’t been able to confirm one way or the other.  Either way, Catharine is going by the name Ostman again by 1857.

What happened to the children?  Why weren’t they with their mother?  Daughter Christina was married to Jacob Sherman and had two children by 1855 [19].  Jacobina, Caroline, and Louisa are in what appears to be a children’s home in 1855 [20].  George is probably in a children’s home, too, but I haven’t located him.  However, by the 1860 census, he and Jacobina are living with Christina and her family; his occupation was “seaman” [21].  Caroline and Louisa are still in a children’s home at that time, and now so is John [22, 23].  There is a Catharine J. Ostman in the 1860 Boston census that I believe is the same person [24].  She is listed in the household of James A. and Mary B. Plummer, employed as a “tailoress” with place of birth listed as England (see census image below).  No children are with her. 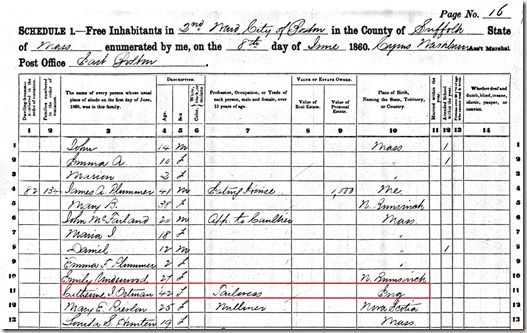 
I don’t know what the Ostmans’ life was like once they arrived in Boston in the mid-19th century, but this family seemed to break down somewhat after the death of Peter Sr. in 1850.  Not able to support her remaining children on her own, Catharine sent most of them to children’s homes, but she had her youngest child John with her and her second husband Andrew Swan in 1855.  Her oldest child Christina was married by that time.  For whatever reason, the marriage to Andrew ended, and Catharine was left to support herself again.  Daughter Christina seems to have taken care of as many of her siblings as she could along with taking care of her own children.  I wonder what Catharine went through after the deaths of her first husband and two of her children.  Was the marriage to Andrew Swan a hasty decision?  Did she marry him for financial support?  Did they divorce or did Andrew die before 1857?  Was Catherine ill?  Is that why it seems she never got her children back?  Were she and her children estranged?  So many questions.