Family Stories in a Novel

While doing genealogy about my family, I sometimes think “Now, that would make a good story!”  I don’t know if I could actually write a full blown novel or a work of nonfiction, but something about the lives of my ancestors tugs at me to tell their stories.  Author Caroline Miller used her family stories and those of other people to write Lamb in His Bosom, a novel about 19th century, non-plantation owning, south Georgians that won the Pulitzer Prize for literature in 1934. 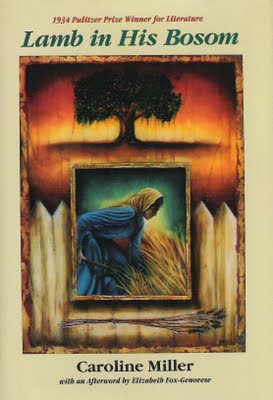 On the New Georgia Encyclopedia website, Carey O. Shellman writes about the book,

Described by literary critics as a work of regional historical realism, Lamb in His Bosom depicts the struggle and hardships of poor white pioneers in the nineteenth century on the south Georgia frontier, known as the wiregrass region. The story begins with the marriage of sixteen-year-old Tillitha Cean Carver to Lonzo Smith, a neighboring yeoman farmer several years her senior. By the time Cean is forty-three, she has borne fourteen children, buried five of them and a husband, and survived civil war, a venomous snakebite, a ferocious panther attack, and a deadly house fire. She perseveres to find contentment in a second marriage to a New Light preacher named Dermid O'Connor[1].


The article says that Caroline Miller, who grew up in Waycross, Georgia, and lived in Baxley, Georgia, during her first marriage, went around rural south Georgia collecting stories.  My father told me several years ago about this book.  When he told me about it and said that it won the Pulitzer Prize in the 1930s, I wondered why I hadn't heard of it before.  He told me that the author had interviewed "the family."  I assumed he was referring to the Pendletons since he also mentioned that she was from Waycross, and I knew that my second great grandfather and his family had lived there at one time.  My father said that when the book came out, "the family" went up in arms.  They were shocked to see their stories in print and without their permission!  After hearing this, I couldn't wait to get my hands on a copy.  I wondered what juicy details were in the book!  I'm sorry my family was upset (or embarrassed, maybe?), but what a great thing for me as a descendant to read about what their lives may have been like!  The whole time I was reading the book, I wondered, "Was this part influenced by one of my family's stories, or is it this part?"

I also wondered who in my family she may have interviewed or who knew my family and told her some stories about them.  I would love to know which parts, if any, are about them.  Did her family know my family?  My paternal second great grandparents Philip Coleman and Catherine Sarah Melissa (Tebeau) Pendleton and their children lived on a farm in the piney woods of Ware County in Tebeauville (named after Catherine's father and later renamed Waycross because of the railroad).  They lived there for a few years before moving to a farm just outside of Valdosta in Lowndes County Georgia sometime during the Civil War[2].  In fact, they are listed in the 1860 Ware County census[3].  According to the New Georgia Encyclopedia article, Caroline Miller's maiden name was Pafford, a name known in that part of Georgia.  Listed next to the Pendletons in the 1860 census are their neighbors the James Pafford family.  I couldn’t find a direct connection between this Pafford family and Caroline Miller’s Pafford family in a quick search on ancestry.com, but there is probably a connection somewhere.  I don’t think I had any relatives still living in the Waycross area when Mrs. Miller was living there, so I don’t know who she might have interviewed.  Maybe her Pafford relatives told her some stories about the Pendletons.

In the New Georgia Encyclopedia article, Shellman says, “With characters named after Miller’s own family members, Lamb in His Bosom grew out of her interest in local research and genealogy.”  I can see why this inspired her to write.  There are stories happening in the background of the census and land records, behind the birth, marriage, and death records.  Family stories inspired my second great uncle Louis Pendleton to write, and they inspired my father to write, too.  More on this later on.