My paternal 3rd great grandmother Hulda Lewis was born September 30, 1795, in New York, probably in New York City. I'm not sure I have the correct parents listed for her in my tree--Gilbert Lewis and Eliza McBride. In Confederate Memoirs, it is mentioned that Hulda was related to George Washington's brother-in-law Fielding Lewis who married George's sister Elizabeth (Betty), but I haven't been able to find a connection between Hulda and Fielding Lewis.

What drew Hulda from New York all the way down to Savannah, Georgia, in the hot, humid south to meet and marry my 3rd great grandfather Frederic Edmund Tebeau there on February 20, 1817? Did Frederic meet her in New York? If so, what was he doing there? There must be an interesting story here.


One of Hulda's great granddaughters Constance Pendleton wrote in Confederate Memoirs: "She was beautiful and exquisitely dainty, she never touched money but picked it up with a bit of white tissue paper...She was a severe and rather pious woman, who was strict in carrying out her principles." Hulda taught the supposedly reluctant slave children to read and "insisted on their learning by heart verses from the Bible." Her Pendleton grandchildren (children of daughter Catharine and Philip Pendleton), could not escape her insistence on Bible verse memorization either. Hulda would go visit her family in New York every year or so for a month and would take her youngest child with her. Apparently all of the slave children, as well as her Pendleton grandchildren, enjoyed a vacation away from her strictness while she was gone. (Her going to New York where her family was is a good clue.)

It sounds like Hulda didn't care too much for her home New York City. In a letter dated May 19, 1870, to her grandson Philip Pendleton, she wrote, "Now I perceive why I was so much troubled, on account of his [grandson William Pendleton] visiting N. Y., altho [sic] my own native city, I verily believe that it is the worst place in the whole world." Now I need to research what New York City was like during this time to make her say that!

Getting back to who Hulda's parents were, I made a naming pattern chart based on one that I found on Rootsweb to look for clues (click on it for a larger view): 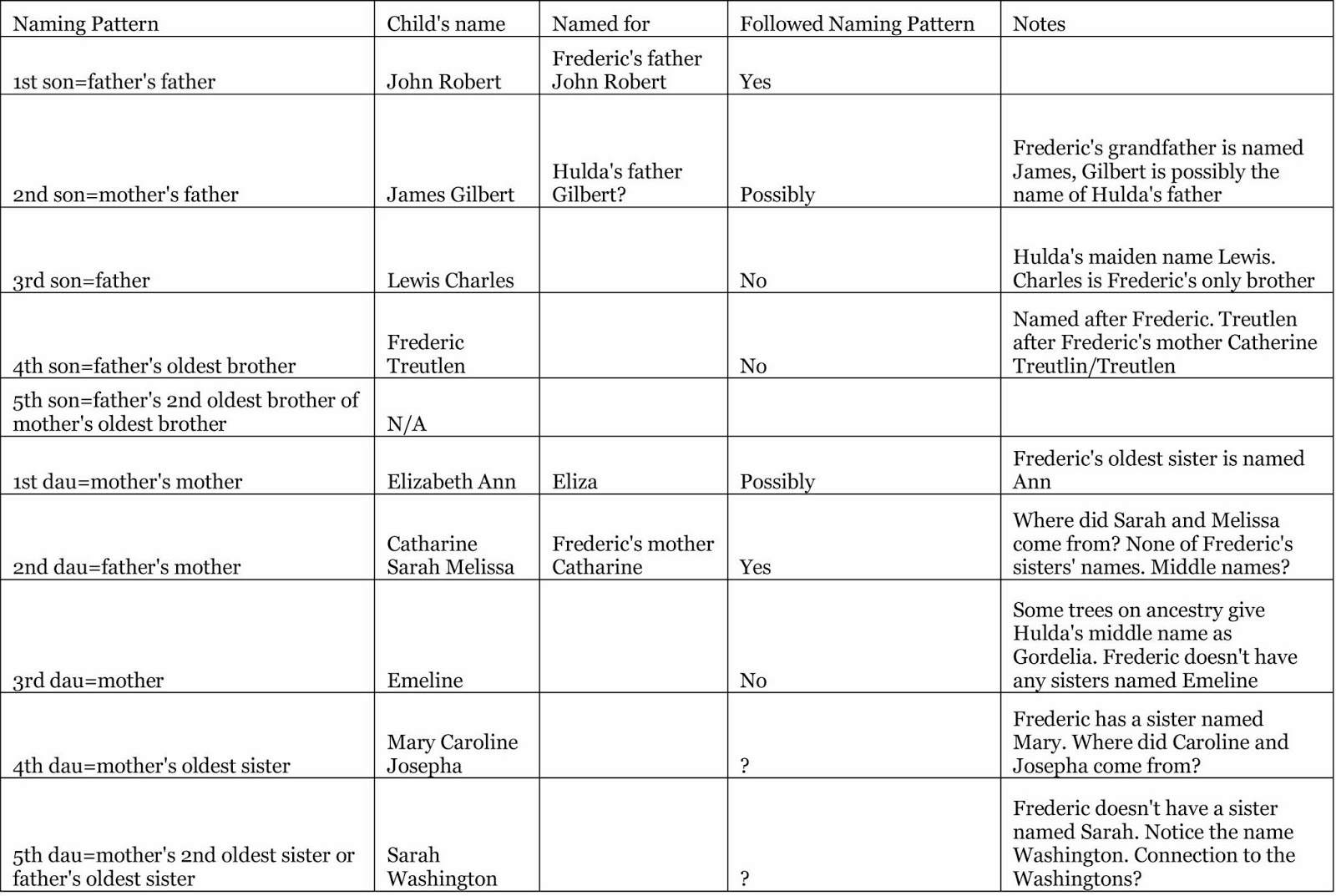 Based on the above naming pattern chart, it's possible that Hulda's father was named Gilbert, her mother was Eliza or maybe Elizabeth, and the other names that I can't account for are her siblings' or grandparents' names. The siblings I have for Frederic are Ann Margaret, Mary, Charles Watson, and Susan. At least I have a few clues to go on when I get back to researching who Hulda's parents were!

Hulda died on November 21, 1875, and is buried in Springfield in Effingham County in the Tebeau cemetery.


This post is part of the 52 Ancestors in 52 Weeks challenge by genealogist Amy Crow at No Story Too Small.