I've been having a grand ole time (well, when I don't feel overwhelmed by it all) digging through boxes and paper piles in my dad's office. I always find something interesting.  I don't know when I'll get back to filing this mass of paper, but once in a while, I decide to go on a quest. A couple of months ago, I picked a box to pick through. I was actually looking for something else, but I found this photograph of my paternal grandfather Albert Sidney Pendleton, Sr. taken with some of his friends.

This photo is not the original but a copy that my dad made, and it was tucked into an envelope with my dad's illegible handwriting on the outside as to who these young men are. 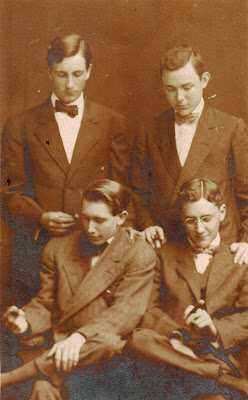 Here's a translation of my dad's handwriting as best as I can tell and some information about his friends in the photo: The top left is my paternal grandfather Albert Sidney Pendleton, Sr. Next to him on the right is Kenyon Corner, the brother of Sue Corner who married my granddad's brother Philip Coleman Pendleton. I believe the young man on the bottom left is Tom Stevens. At least it looks like that's what my dad has written. Since I remembered reading about some parties in the Valdosta Times newspapers that my granddad attended, I searched for these as they often listed the guests. Sure enough, listed as one of the guests at these parties is Tom Stevens. On the bottom right is William Edmund Pendleton, my granddad's first cousin and the son of my second great uncle Charles Rittenhouse Pendleton (brother of my great grandfather Alexander Shaw Pendleton). Edmund, as he was called, married my maternal grandmother Leona Roberts' sister Stella.

I don't know the context of this photo. It was probably taken in the early 1900s. The dates of the articles that I found with the party guest lists run from 1905 to 1911. Were they members of some sort of young men's club? Were they at a party? What was the purpose of the cigars in the photograph? To make them look worldly? Are the cigars lit? It looks like my granddad is about to singe Tom's ear. I chuckled when I noticed that my granddad's bow tie is crooked.

I never thought about it before, but my oldest brother sure looks a lot like our granddad. I love old photos! This one reminds me that my granddad was a young man once upon a time. I also realized when I looked back at my first post about my granddad that the above photo and the photo on that post may have been taken around the same time. He's wearing that same crooked bow tie!