Lisa Alzo of TheAccidental Genealogist is having the fourth annual "Fearless Females: 31 Blogging Prompts" for the month of March to Celebrate Women's History Month. There is a topic for each day of the month of March to commemorate the "Fearless Females" in our families. The topic for March 8 is, "Did one of your female ancestors leave a diary, journal, or collection of letters?"

I was telling my mom about this topic, and she said, "What about all of my sister's letters that your dad saved." I said, "Great suggestion!" My aunt reads my blog, so I decided I would let it be a surprise. (After my aunt read this post, she gave me a few corrections that I've added in bold)

The whole 28 years that my aunt, Catherine Redles, was in the Foreign Service, she wrote to my parents. My dad saved every letter. His plan was to make copies for all five of us children, have them bound, and then give them to us. He never finished this project, so I've added it to my list of things to do. 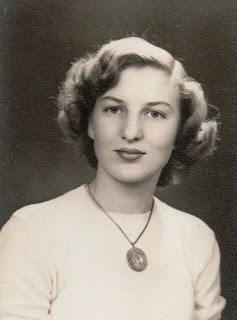 Aunt Catherine joined the foreign service in 1956 after she graduated from the Katharine Gibbs School in New York. She retired in 1984 [she thinks it was 1985] after 28 years of living around the world, working in the American embassies and consolates. My mom and I visited her while she was in Rome, Italy. My brother Andy visited her in Rio de Janeiro, and my sister Helen visited her in Brussels, Belgium, which was Aunt Catherine's last assignment.

While looking in the file that I set up for her letters and papers, I came across a list of her assignments which made me happy--I knew I wouldn't remember every country. Where the heck was Catherine? Well, here's where:

That's a lot of languages to learn. I remember when we visited her in Washington, D.C., in 1966 that she was taking a class to learn Italian. When she was living in Italy, she was complimented by an Italian on how well she spoke the language! I would ask her sometimes on her visits to Valdosta, "Say something in ___" whatever language she could speak.

The heading for the December 3, 1958, Phnom Penh Post newsletter. 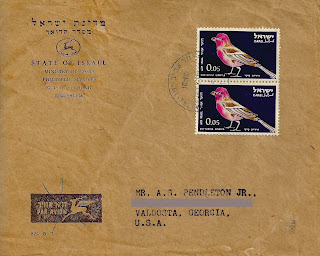 I couldn't find a postmark on this envelope from Jerusalem, but it was mailed sometime between 1970 and 1974. My dad took all of Aunt Catherine's letters out of their envelopes, so the letter is somewhere in the stack.

While digging around in the file, I found a questionnaire that someone (probably my dad) compiled about places Aunt Catherine lived. Here are a few of them. My answers are in parentheses. She'll have to tell me when she's sees this if I'm right:

Where did she find accommodations for 3,000 Americans evacuated from Israel during the war? (Jerusalem) My aunt said, "Soon after my arrival at Rome, the 1966 Israeli war occurred. So that is where the Embassy facilitated 3,000 evacuees from the war zone."

Where did she speed around town with a Christmas tree sticking out of the back seat of her convertible? (Rome) My aunt said, "The Christmas tree was perched in my Fiat 1500 on a drive through Rio de Janeiro, December, summer time."

Where did she get...pinched while touring with Lonie and little Catherine? (the catacombs under the Vatican, of all places. I was warned about the possibility of getting pinched in Rome.) (I got this one right because I was there.)

When I knew Aunt Catherine was coming to Valdosta for a visit, I would get so excited! She seemed so exotic to me, living in foreign countries and speaking foreign languages. She gave me a doll dressed in native dress from every county she lived in or visited. I still have most of my dolls, but they're in storage at the moment. I wasn't supposed to play with them, but I did play with some of them. Those are the ones that didn't last.

Aunt Catherine's letters give us a window into what her life was like in all of the countries in which she lived and visited from the late 1950s to the mid 1980s. They also let us take a peek into our own lives back in Valdosta, as she would mention things that my dad (he was the letter writer in my family) told her about us in his letters to her. I'm so glad that my dad thought to save her letters!

Posted by Catherine Pendleton at 12:10 PM