When I was going through the paper piles in my dad’s home office a while back and more recently in the studio that he first used as a home office, I found a manila envelope and an old wood box filled with late 1800s to early 1900s letters, notes, receipts, and “farmers” or “planters” notebooks. Most of the letters are addressed to L. A. Young in Quitman, Georgia, but one or two of the envelopes have the name spelled out—Lavinia A. Young. Also written on the envelopes is “C/O E. J. Young.” My sister Helen and I opened some of the letters to see who they were from and to look for clues as to the identity of Lavinia A. Young. Several letters are from “M. J. Young” or “Mitchell Young.” Some are from “Jim.” Both men ended their letters with “your son” or “your devoted son.” There is a ledger that states, “The estate of J. E. Young 1874 in account with L. A. Young Extrx.” (See scans below. Click on images for a larger view.) I wondered who she was and why my dad had her letters and other papers. I figured she must be a relative on my mom’s side since my mom’s grandmother was a Young (Catherine Margaret Young). I found enough clues in the letters and papers to figure out that I was right. 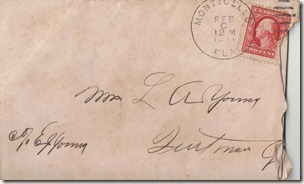 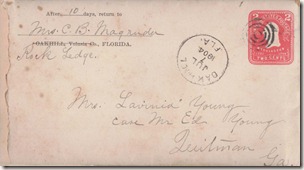 “1874 The estate of J.E. Young in acct with L.A. Young Extrx” (James Everett Young and his wife Lavinia A. Young)

A few letters are from some of Lavinia’s grandchildren:

“Dear Grandma” “from yours Pet” (I haven’t figured out who this is.)

Maybe a descendant found these and gave them to my dad. Who knows. Since this Young branch lived in Quitman, Brooks County, Georgia, I don’t know if he planned to use them to write a newspaper article or a newsletter for the Lowndes County Historical Society, since for both of these mediums, he would focus on Valdosta, Lowndes County, Georgia. Maybe one of Lavinia’s children or grandchildren or great grandchildren lived in Valdosta. A. C. Felton, in The Young Family, traces one of Lavinia’s branches down to a surname of a family who lives in Valdosta. Or at least they did years ago.

I’ve put all of these documents in some acid-free, archival sheet protectors, which is better than what they were in! I’ll keep them at my mom’s until I find a descendant who would like to have them. Maybe the Lowndes County Historical Society will take them if I can’t find anyone. This a real treasure trove!

Catherine
---
* To piece the relationships together I used: A. C. Felton. The Young Family of Georgia. Macon, Georgia: Self published, 1953.

Posted by Catherine Pendleton at 2:53 PM

Email ThisBlogThis!Share to TwitterShare to FacebookShare to Pinterest
Labels: Young