The A. S. Pendleton Company 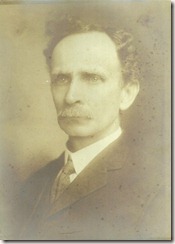 The A. S. Pendleton Company was established by my paternal great grandfather Alexander (Andy) Shaw Pendleton in Valdosta, Georgia, in the mid-1870s.  I remember my dad telling me that the company started out as a fruit stand, and it eventually grew into a wholesale grocery business.  (I was also told that “The” is part of the company name…this is the reason I named my blog “The” Pendleton Genealogy Post.  And “Post” is an homage to my second great grandfather Philip Pendleton’s newspaper days.)

Working at The A. S. Pendleton Company

Four generations worked at The A. S. Pendleton Company, including me when I was in high school.  I mentioned in an earlier post that my mom worked there, too.  By the time I began working there in the late 1960s, my dad was the president.  (My grandfather died in 1965.)  The company had moved to South Toombs in the former Valdosta Flour Company building south of the railroad tracks.  I started out working in the warehouse putting the tax stamp on cigarette packs and stocking the candy (yum…the candy, not the cigarettes).  At some point, I ended up in the office running the bookkeeping machine occasionally, waiting on walk-in customers (including at least one moonshiner), and taking in the money collected by the delivery men from some of the customers.  Somewhere along in there, my Uncle Jack May taught me how to use a 10-key calculator without looking at the keys.  I thought that was the coolest thing.  I used to hide out in the back office sometimes and eat Baby Ruth candy bars and drink grape or orange sodas.  I know I sometimes harp on how messy my dad’s home office is at my mom’s--well, it was just as messy (if not worse) at his office downtown.  He dared anyone to touch it.

A Great View of Santa Without Standing on my Tippy Toes 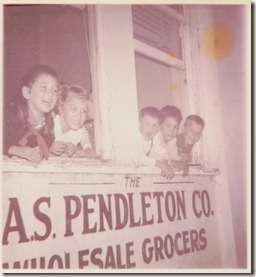 When I was a kid, we used to watch the Christmas parade from the office windows when the The A. S. Pendleton Company was on the corner of South Patterson Street and Crane Avenue in downtown Valdosta.  The building has since been torn down.  In this photo, I’m the blonde girl second from the left.  My oldest brother is on the far right.  With us are our neighbors the Stricklands and our cousins the Hart boys.  Look at how excited we were!

The End of a Family Business

The A. S. Pendleton Company closed down in the early 1970s.  I remember how bad my dad felt about it…the company that his grandfather started nearly 100 years earlier was closing under his watch.  The company just could not compete with the big chain grocery stores who could buy their groceries in large quantities directly from the factory and circumvent the middle man…the wholesaler.  Several of the small, locally-owned grocery stores that he “traded with,” as he called it, went out of business, too.  Such was the end of a family business that was nearly a century old.

Did your family have a family business? Please share in the comments.